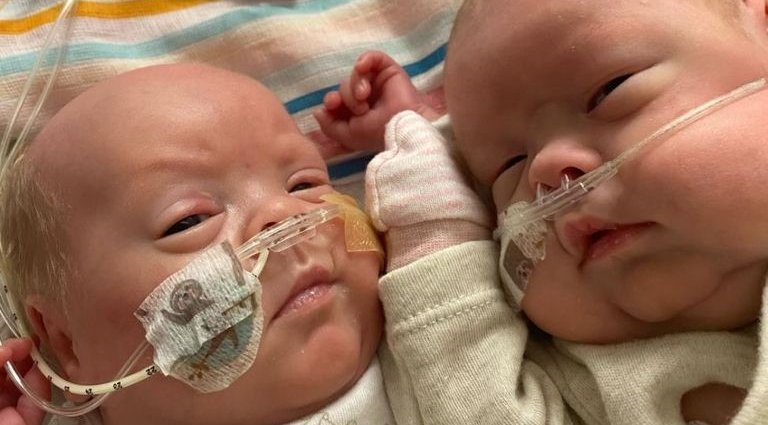 Twins born on October 26 some four months premature have overcome multiple difficulties and operations to survive, with the good news that they could be headed home soon. The twins are believed to be the most premature to survive in the UK.
Born in at the Queen’s Medical Centre in Nottingham to mother Jade Crane who spoke of her “absolute disbelief” at going into labour nearly four months early.
Doctors told her there was a high chance of her having a miscarriage, but Harry and Harley Crane she said: “Aare doing amazingly. We aren’t out of the woods yet, but we’re taking it day by day.” She continued saying: “They are little fighters.”
Harry and Harley, who weighed 500g (1.10lb) and 520g (1.14lb) respectively when they were born, are now 16 weeks old.
They have had six operations between them, she said, and suffered sepsis, eye problems and lung and brain bleeds but now may be able to leave hospital within the next week, before their original due date.
Ms Crane who has become “reliant” on her team of nurses at the hospital, who said that her twins were the smallest babies they had ever seen.
Mei Li Powell, of the Borne Foundation, a charity that aims to prevent premature birth, said: “A multiple birth at such an early gestation is incredibly rare and we wish the twins and their family the best on their neonatal journey.
“While survival rates in recent years have increased for babies born prematurely, more research is needed to prevent premature birth and to ensure more babies survive.”
Given all the complications they have faced, the news that the twins born four months premature have survived and will be going home soon will warm the hearts of all mothers.