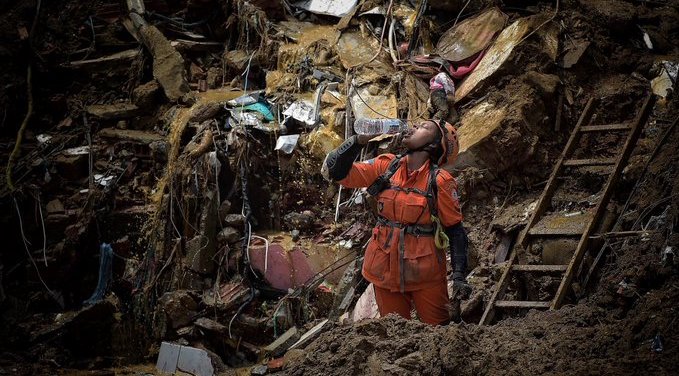 Authorities say that more than 70 people have died and many more have been injured as flash floods and landslides wreak havoc in the Brazilian city of Petrópolis.
The city, which is located in the mountains north of Rio de Janeiro, has been hit by torrential rainfall destroying houses in hillside neighbourhoods and sweeping away cars as floodwaters race through the city’s streets.
The city’s mayor has declared a state of emergency as search and rescue teams combing the mud for survivors.
Videos shared on social media show extensive damage and vehicles floating in the streets.
“I found a girl who was buried alive,” Wendel Pio Lourenco, a 24-year-old resident, told the AFP news agency while heading to a local church in search of shelter.
“Everyone is saying it looks like a war zone.”

A record 258.8 mm of rainfall fell in 24 hours in the town of #Petrópolis north of Rio de Janeiro in #Brazil, according to @inmet_
Resulting flash floods have claimed more than 30 lives, according to news reports.
Our thoughts are with all those affected. pic.twitter.com/6Td65ZtEG6

President Jair Bolsonaro, who is on an official trip to Russia, has said he will organise immediate help for the victims with more than 180 soldiers already deployed and more specialised search teams expected to arrive later on Wednesday.
In one of the worst-hit neighbourhoods, 80 houses are estimated to have been damaged by the gushing water.
Petrópolis, once the summer residence of the Brazilian emperor, is a popular tourist destination but its location means it is also prone to landslides.
The worst incident happened in 2011, when more than 900 people were killed as landslides brought on by torrential rains and flashfloods hit Petrópolis and neighbouring cities.