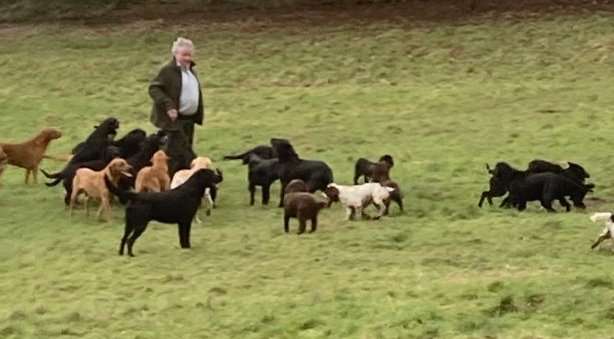 Storm Dudley has caused the death of 13 dogs near the North Yorkshire town of Ampleforth. A power cable carrying 11,000 volts of electricity was reportedly brought crashing down on top of their kennels at Cuckavalda Gundogs yesterday, Wednesday 16, at around 4pm.
“Jack, Anna, and Tom, would like to thank everyone who has shown their concern and given help, and to Grace Lane Vets for coming ou”, read a statement from a Cuckavalda Gundogs spokesperson.
A post on social media said, “There will not be a #FridayFavourite this week, as we remember Cockers: Troy, Olive Labradors: Guy, Goldie, Port, Dill, Dora, Rick, Cora, Polly, Tilly, Ivy, and Rose”.
“RIP you beautiful creatures – all taken far too young – Aged between 7 months and 6 years”, it added.
This tragic incident is under investigation by Northern Powergrid. “Storm Dudley caused a tree on a customer’s land to fall and bring down a section of overhead power line onto kennels which were situated directly under the section of electricity network”, said a spokesperson for the company.
“Sadly, a number of dogs in the kennel were electrocuted. As soon as we were alerted, we isolated supplies in the YO61 and 62 areas, causing a power cut for around 680 customers. Our contact centre advisor also provided immediate safety advice to the customer to stay clear of the area and metal kennel”, they continued.
Adding, “Power was safely restored to the majority of customers last night. We remain in contact with the customer, and our teams are on site carrying out final repairs to the section of network damaged by the storm”, as reported by dailystar.co.uk.