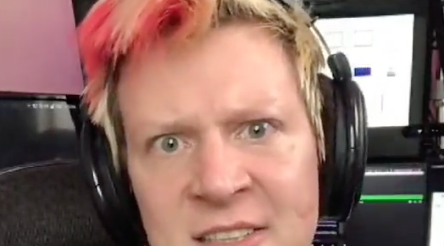 A MAN going by the name Kirtaner on TikTok, under the user handle @thatnotoriousk, claims that he doxxed the Canadian truckers in Ottawa and hacked the GiveSendGo account set up to raise money for the Freedom Convoy.
Receiving questions during a live stream on his TikTok channel, Kirtaner, later revealed to be notorious Canadian hacker Aubrey Cottle, seemingly had the full support of his followers, as he shouted: “Yes, I doxxed the truckers, I did it, it was me.
“I hacked GiveSendGo baby and I would do it again,” he angrily exclaimed.
Cottle screamed: “I’d do it a hundred times. I did it. I did it. Come at me. What are you going to do, what are you going to do to me, ha?”
The live stream on Wednesday, February 16 came after personal details of 92,000 people, who donated to the “Freedom Convoy 2022” campaign on Christian-focused crowdfunding platform GiveSendGo, were leaked.
Cottle, who was apparently one of the founding members of the hacktivist group Anonymous, then reeled off other hacking accomplishments.
“I hacked Epic hosting, I hacked Parler, I hacked Gab, I hacked Truth Social, I hacked GiveSendGo, I don’t care,” Cottle added. “I’m literally a famous fucking cyberterrorist, and you think that you can scare me?”
Many people online called the hacker “demonic” and “evil”. And the ramifications of his actions have been widespread, with people losing their jobs and some having their money seized and even their pets taken away.

The whole situation which started with Canadian lorry drivers wanting to protest about the vaccine mandates put in place by Canada’s PM Justin Trudeau has escalated into so much more.
On February 11, we reported that the Freedom Convoy in Canada had its donation funds frozen AGAIN, this time by the Ontario government and from fundraising site GiveSendGo.
Then on Monday, February 14, Trudeau invoked the Emergencies Act to deal with the “Freedom Convoy” protesting against vaccine mandate laws in the country.
The Freedom Convoy protests, which was started by Canadian truckers opposing a COVID-19 vaccinate-or-quarantine mandate for cross-border drivers, have drawn thousands of people opposed to Trudeau’s policies.
Speaking on Monday, February 14, Trudeau said: “With each illegal blockade, local law enforcement agencies have been acting to keep the peace within their jurisdiction. Despite their best efforts, it is now clear that there are serious challenges to law enforcements ability to effectively enforce the law.
“On Friday, Ontario invoked a state of emergency to respond to the blockades. This was the responsible and necessary thing to do. Today, to continue building on these efforts, the federal government is ready to use more tools at its disposal to get the situation fully under control.

“After discussing with cabinet and caucus, after consultation with premiers from all provinces and territories.. the federal government has involved the Emergencies Act to supplement provincial and territorial capacity to address the blockades and occupations.
“The scope of these measures will be time-limited, geographically targeted, as well as reasonable and proportionate to the threats they are meant to address,” he said.