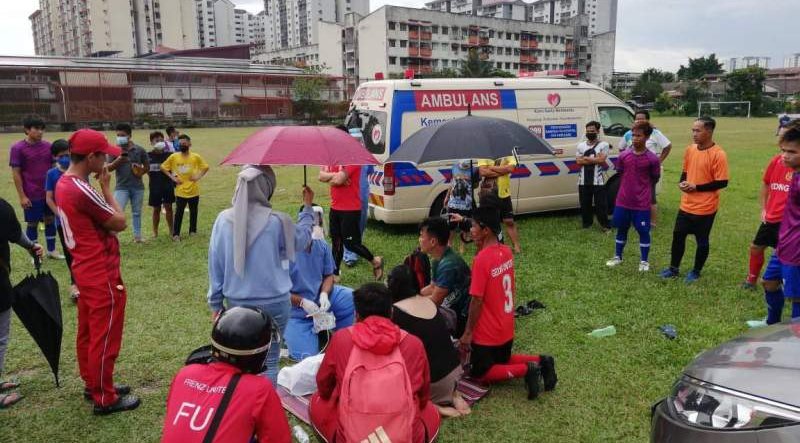 A football referee died suddenly during a game in Kuala Lumpur.

HEARTBREAKING NEWS – A football referee died suddenly during the first half of a game taking place near the Malaysian capital of Kuala Lumpur on Sunday, February 13.
The ref, believed to be in his 50s, collapsed in the 19th minute of the game in Jalan Sungai Chua, Taman Berjaya, Kajang and was sadly pronounced dead at the scene.
The Kajang District Police Headquarters (IPD) received an emergency call at 4.17 pm but when the medical team arrived at the football pitch, they were unable to revive the official.
Kajang District Police Chief, Assistant Commissioner Mohd Zaid Hassan said that initial investigations found that the victim collapsed while refereeing a football match that only lasted 19 minutes.
“Ambulance staff arrived at the scene and continued to conduct an examination on the victim before confirming his death.
“The body was sent to Kajang Hospital for autopsy. So far, the case has been classified as sudden death,” he said in a statement on February 14.
Distressing footage of the collapse was released on social media and many users paid their respects, writing “RIP” and noting that it was a “tragic event”.
However, many other people on Facebook, noted that they were worried that Covid or the Covid vaccine may have played their part in the referees’ death – although there are no reports to say either way.
Translated from Malaysian, one user wrote: “Since the national vaccine program, there have been a lot of sudden death cases reported.”
“When there is a sudden death… There are those who want to be associated with vaccines… but as far as I know from the past… there are many more cases like this before Covid cases start to spread,” another said.
One user noted: “I’m sorry I don’t know which one is right, for sure now there are more sudden deaths, heart attacks, but before the arrival of Covid, there were also sudden deaths, but rarely heard of, now the sudden deaths are reported.”
“The country is also suffering from an epidemic of sudden death caused by heart attacks,” another wrote.