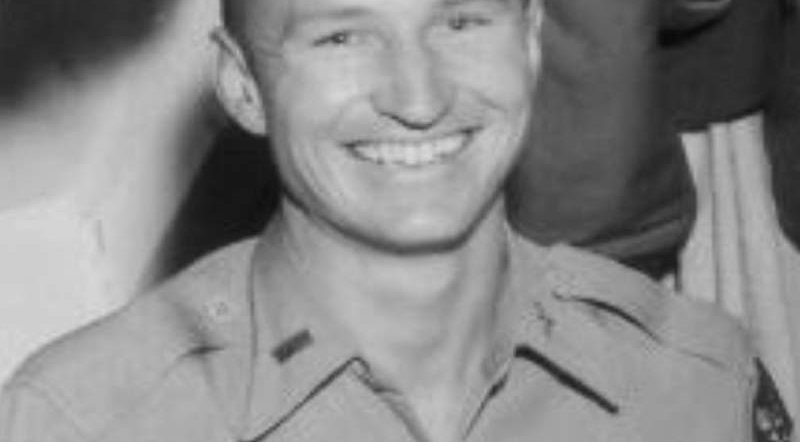 Known as the “Candy Bomber”, Gail Halvorsen who dropped sweets for the children struggling for food in Berlin after WW2 has died aged 101.
Halvorsen, who died at his home in Utah following a short illness, had mixed feelings about helping Germany after the war. However he could see himself in the children who lined the airport fence at a time when Berlin was struggling for food.
James Stewart, the Director of the Gail S Halvorsen Aviation Education Foundation announced his passing saying that he was surrounded by most of his children.
A US airman, who initially trained as a fighter pilot and served as a transport pilot in the South Atlantic during the Second World War, he found himself flying food and other supplies to West Berlin during the Soviet blockade of the area.
His foundation said that he had mixed feelings about helping a country that had been an enemy of the US during the war, especially as he had lost friends during the conflict. But he changed his mind after meeting a group of children behind a fence at the city’s Tempelhof airport.
Halvorsen apparently offered them two pieces of gum that he had broken in half, and was visibly moved when those who got the gum shared pieces of the wrapper with the other children, who all took turns to smell the paper.
He promised to drop enough candy for all of them the following day, wiggling the wings of his plane as he flew over the airport.
After that encounter he regularly candy drops, using his own rations and handkerchiefs as parachutes to carry the precious little cargo to the ground. When news of his efforts spread some of his fellow pilots joined in and, when the story reached news reports, readers donated candy and handkerchiefs.
Halvorsen was much-loved in Berlin, even decades after the airlift, and he visited as recently as 2019, when the city celebrated 70 years since the blockade was lifted.
One of those who paid tribute after his death were the German Embassy in the US, and Berlin’s mayor Franziska Giffey.
Ms Giffey said: “Halvorsen’s deeply human act has never been forgotten.”

During the Berlin Airlift, Halvorsen dropped candy from his plane for the children. Soon, it became a massive Air Force operation, giving hope to millions.

I celebrate your 101 years of life and friendship. pic.twitter.com/dzii5Rf127

Spencer Cox, governor of Utah, where Mr Halvorsen was born and raised, said: “I know he’s up there, handing out candy behind the pearly gates somewhere.”
Following the end of WW2, four powers occupied Berlin with Russia attempting to squeeze out the other three, the USA, France and the UK. As a result the allies flew some 278,000 flights dropping about 2.3 million tons of aid, food, coal, medicine and other supplies to the waiting people.
The Soviets eventually gave in after about a year but the airlifts continued for months in case the situation changed, with Halvorsen’s flights bringing a moment of joy to the starving children.
According to Stewart, Halvorsen had grown up in a poor family during the Great Depression, and saw a bit of himself in the children behind the fence at the airport saying: “A simple person-to-person act of kindness can really change the world.”
With the post war Candy Bomber having passed away, it is a shame that his story does not reach the likes of those who war monger and who constantly reject peace – as the saying goes “lest we should foget”, well it seems in many ways that the world has already forgotten.