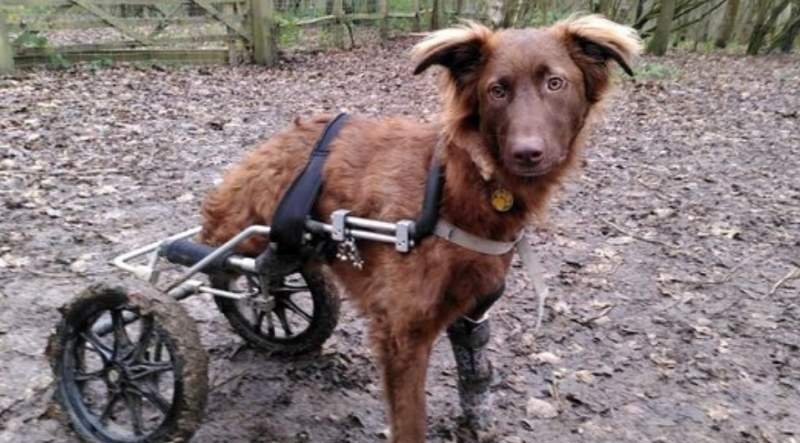 Heart warming tale of the one-legged dog saved after a hit-and-run. image:

An incredible lady and her charity rescued Giselle and nursed her back to life, surviving as a one-legged dog

Giselle, a one-legged disabled dog has been given a new lease of life thanks to Natalia George, the wonderful woman who rescued her, and saved her life as an 11-month-old puppy.
The incredible German shepherd cross was the victim of a hit-and-run incident that left her at death’s door. She was spotted on a traffic security camera, lying at the side of the road. As a result of the accident, the unfortunate pooch had two legs and one paw amputated.
Natalia, the founder of Flori’s Friends Rescue in Kent, nursed the stricken dog back to health. Eventually, after 10 hard months, she couldn’t bear to be separated from her, so she adopted Giselle. “The amount of blood, sweat, and tears we went through meant everything”, said the new owner.
It was last February when Giselle was rescued, at the time of the accident, her spine had actually been broken and fused together. It seemed an impossible task for Natalia’s charity to save the dog’s mobility, and she became known as “the charity’s hardest challenge to date”.
Natalia, knowing the ordeal ahead, was determined not to give up on the poor animal, “I have a duty of care. My job is to keep injured animals safe”, she said. Adding, “Rehab was so intense, and such hard work. The journey we went on together was just incredible”.
The charity’s idea at first was to get Giselle better again and find her a home. It soon became evident that the dog’s needs were so great that it “wasn’t safe to rehome her. We care for a lot of paralysed and disabled dogs, but Giselle is on another scale”, commented Natalia.
Finding a home for an animal with such needs would have been nigh impossible, so Natalia made the brave decision to adopt Giselle. She is now the mascot of Flori’s Friends Rescue, and lives happily at Natalia’s home. “Even if she had recovered differently, I couldn’t give her away”, Natalia said of her pet.
A four-wheel cart was designed in America to help Giselle get mobile again, and a specialist clinic in Oxford constructed a prosthetic leg. Sadly, Giselle now suffers with incontinence and arthritis, but “none of that stops Giselle from enjoying life to the absolute fullest”.
This incredible dog really is something special, after enduring the ordeal of recovering she now spends two hours each day moving around with her new wheels, and even chases squirrels. “Giselle had the will to live – there was no other way she’d have survived”, explained Natalia.
The downside of this amazing story is that the medical bills for just one year have been in excess of £15,000 in just one year. A sponsor page has been set up by Natalia where members of the public can make a donation to help Giselle.
Giselle is one of the lucky animals to actually find a caring, loving owner, and home, but Flori’s Friends Rescue has many more disabled dogs just like her. If you would be interested in helping home one of their dogs, please visit their adoption page, as reported by mirror.co.uk.