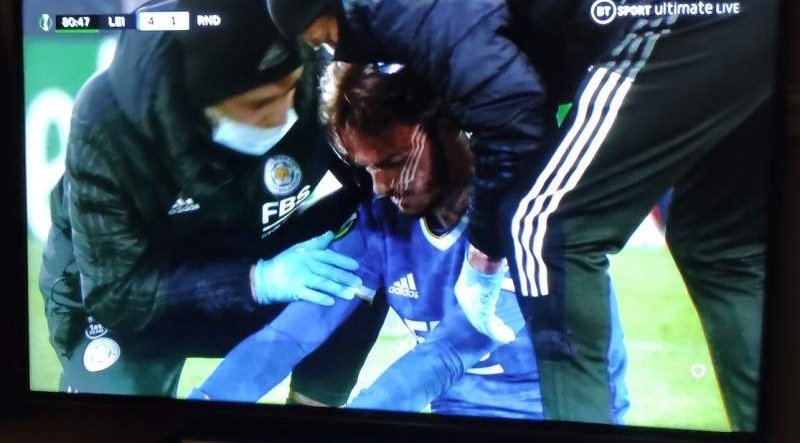 DESPITE winning the game comfortably, Leicester City suffered a worrying incident during their Europa Conference League clash against Danish side Randers, when star midfielder James Maddison suffered a health scare after coming on as a second-half substitute.
Maddison slumped to the pitch and medics were seen checking his pulse after lasting only 19 minutes in the game. The incident sparked many online to speculate whether he was having a heart attack.
The 25-year-old was taken off in the 83rd minute and was helped from the field. Thankfully, he was able to walk down the tunnel by himself.
Leicester boss Brendan Rodgers told reporters after the game: “He [Maddison] just felt a bit funny in the game. We didn’t want to put any risk with that. He didn’t feel well so we took him off.
“He went in to see the doctors but I have just spoken to him. He was sat up, he felt a little unwell in the game and a little faint but he is OK.”
The worrying incident comes after several other footballers have collapsed to the ground during games in recent months. Although, it appears that this incident may have been less dramatic than previous ones.
The highest-profile cases involving Christian Eriksen and Sergio Aguero resulted in both suffering major heart issues.
Eriksen was fitted with a cardioverter defibrillator (ICD) device after he suffered a heart attack during Denmark’s opening match of Euro 2020 against Finland.
Eriksen has since managed to continue his career, recently signing for Premier League side Brentford.
Sadly, former Manchester City star Sergio Aguero was forced to retire from football at the age of 33 due to a heart condition.
The Argentine football icon called time on his illustrious playing career after a heart condition scuppered his move to FC Barcelona, having only played five times for the club.
The 33-year-old was taken to hospital after experiencing chest pains and breathing difficulties during Barcelona’s 1-1 draw with Alaves in October and was subsequently ruled out of action for three months following a cardiac arrhythmia diagnosis.