Monster volcano in Guatemala erupting up to six times an hour 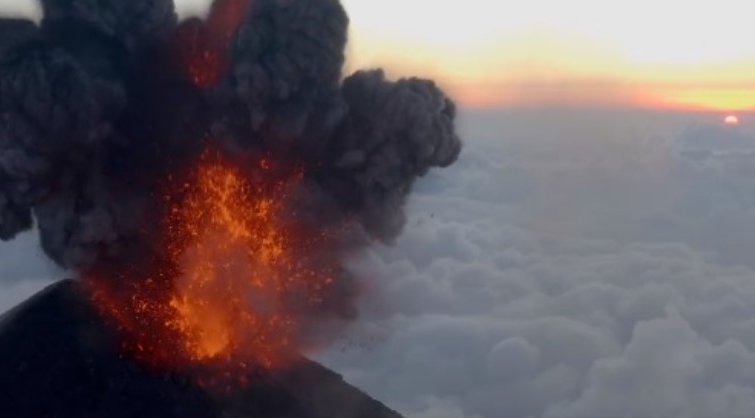 According to the National Institute of Seismology, Volcanology, Meteorology, and Hydrology in Guatemala, the monster volcano known as ‘Volcan de Fuego‘, has been erupting continuously throughout Thursday, February 17.
Ash clouds have been expelled up to an estimated height of between 4000 metres (13,120 feet) and 4800 metres (15,740 feet) above sea level say experts from the entity. During Thursday evening and this Friday morning, pulses of molten lava could be seen shooting up to at least 100 metres into the sky.
As the volcano rumbled violently, nearby property owners reported feeling their roofs and windows shaking. It is reported that the communities of Morelia, Sangre de Cristo, Finca Palo Verde, San Pedro Yepocapa, and Panimache I, have all been blanketed by clouds of ash from the eruptions.
At least three people are believed to have been killed when a 6.8 magnitude earthquake shook the region on Wednesday 16. According to the National Coordinator for Disaster Reduction (Conred), around 24,000 people were affected by the tremor.
Thursday’s eruption is not being linked to the earthquake. “The activity had started much earlier, at least a week, so there would be no relationship between the eruption and the tremors”, explained Jorge Giron, who is an expert from the Guatemalan Seismological Service, and the Mariano Galvez University.
Located just nine miles west of one of the country’s most famous cities, Antigua, the ‘Volcano of Fire’ is a very popular tourist attraction. It has erupted several times since 2000, as reported by dailystar.co.uk.