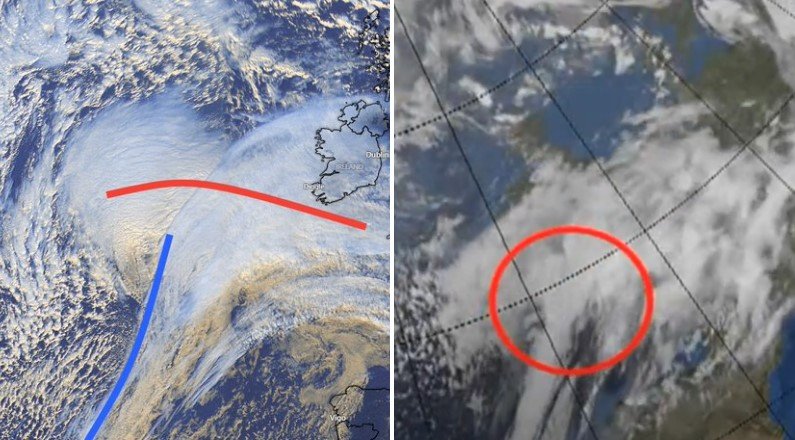 As Storm Eunice batters the UK today, Friday, February 18, there are four confirmed fatalities so far. Gale-force winds of up to 122mph were registered on the Isle of Wight, as they smashed into the country, bringing widespread devastation to many places.
A man in his 60s, in Co Wexford, Ireland, was killed this morning in Ballythomas, while clearing fallen debris. “It is with deep regret and sadness that Wexford County Council confirms that one of our employees was fatally injured earlier today in a workplace accident”, said a council spokesperson.
Adding, “The accident occurred as the employee attended the scene of a fallen tree in the North Wexford area. The employee’s family, An Garda Siochana, and the Health and Safety Authority have been informed. Our thoughts and prayers are with the employee’s family, work colleagues, and friends at this very difficult time”.
Another fatality occurred in London where a female in her 30s died. This incident occurred at around 4pm in Muswell Hill Road, in the London Borough of Haringey. She was the passenger in a car, and was fatally injured. The driver, also in his 30s, is said to be in a non-life-threatening condition in hospital.
“Officers believe they know the woman’s identity and her family have been informed. They will be supported by specialist officers”, said a spokesperson for the Met Police.
Just before midday, a tree believed to be around 10 feet tall, fell and crushed a vehicle that was travelling along Old Odiham Road, a residential street in the East Hampshire market town of Alton.
Emergency services attended the incident, with two police cars, a fire engine, and a JCB digger reported at the scene. Witnesses reported seeing emergency workers in bloodied clothing attempting to save the life of the driver.
“We are responding to a serious single-vehicle collision on Old Odiham Road, Alton, which happened just before midday today. The road is closed while emergency services attend. If you have to travel, please seek an alternate route while we attend the incident”, said a spokesman for Hampshire Constabulary,
A fourth fatality occurred when falling debris struck the car windscreen of a man in his 50s, while he was driving in the Netherton area of Merseyside, as reported by thesun.co.uk.