'Stranger Things' announces season four date and when it will end 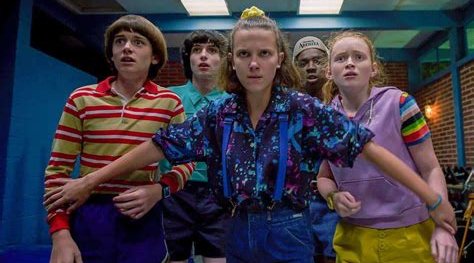 Possibly one of the most successful series on Netflix, Stranger Things, has after a two year hiatus announced a date for the launch of season four and when the series will end.
The Duffer Brothers, creators of the twisty science fiction series, wrote in a letter to fans saying: “Seven years ago, we planned out the complete story arc for ‘Stranger Things.’ At the time, we predicted the story would last four to five seasons.
“It proved too large to tell in four but, as you’ll see for yourselves we are now hurtling toward our finale.”
Netflix announced that the next season of the series (season 4) will debut in two parts this summer. The first part will premiere on the service on May 27 and the second part will hit on July 1.
“With nine scripts, over eight-hundred pages, almost two years of filming, thousands of visual effects shots and a runtime nearly twice the length of any previous season, ‘Stranger Things 4’ was the most challenging season yet, but also the most rewarding one,” the Duffer Brothers wrote.
Fans have been waiting patiently for the return of the show, which last aired on Netflix in July 2019, and will mark the end of an era for Netflix
“Stranger Things” is arguably Netflix’s most important franchise and helped make it the top service in all of streaming. “Stranger Things” is more than just a TV show, however. It is a cultural sensation and a big business that includes video games, theme park attractions, fast food items and merchandising as well.
For those that don’t know it, the show tells the harrowing tale of Midwestern kids who deal with monsters from a parallel universe.
The show came out of nowhere when it first debuted in 2016 but  quickly gained a deeply devoted following, with the end of the franchise likely to be a big loss for Netflix, which is trying to make more of its series and films into franchises as it attempts to fend off rivals like Disney+. Many of Netflix’s competitors feature numerous familiar brands that get subscribers to sign up.
Although losing “Stranger Things” is no small thing for Netflix, the adventures into the upside-down are unlikely to completely end, according to its creators the Duffer Brothers who said: “There are still many more exciting stories to tell within the world of ‘Stranger Things;’ new mysteries, new adventures, new unexpected heroes.
“But first we hope you stay with us as we finish this tale.”