Thousands without power as Storm Eunice moves over Ireland 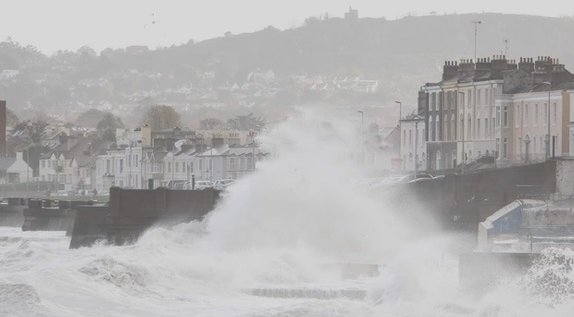 Storm Eunice hit Ireland this morning leaving thousands of homes in Cork and Kerry without power as gusts of more than 130km/h are reported in some areas, accompanied by heavy rain.
ESB Networks say crews are on site trying to restore power to the more than 2,100 homes affected in Co Kerry and the more than 1,200 homes in Co Cork with power outages also recorded in Waterford, Donegal, Offaly, Wexford, Mayo, and Roscommon.
The yellow warning for snow and ice has also been extended by Met Éireann for the entire country until 10am today. It warned that the accumulations will cause hazardous conditions in some areas and that people should restrict journeys where possible.
The chair of the National Emergency Co-ordination Group (NECG) said Eunice will be a high impact, multi-hazard storm bringing coastal flooding, damaging winds and blizzard conditions – with the storm at the “upper end” of the winter storms

Hourly weather reports from our 25 synoptic stations can be viewed here ⬇️https://t.co/MvCx72KIaT pic.twitter.com/0OJjrQrwJJ

A Status Red wind warning is in operation for Cork, Kerry and Clare until 8am.
A similar warning for Co Waterford comes into operation at 7am, where winds have been picking up strength.
Some public areas are closed, including the Prom in Tramore, and coastal car parks in Dungarvan, including the Davitt’s Quay car park, The Pond and The Lookout.
Flood protection barriers have been put in place in vulnerable areas and sandbags have been distributed amid fears of coastal flooding.
Bus Éireann has suspended bus services in Waterford until 1pm while many bank branches will remain closed until 1pm, as will some retail outlets.
A Status Orange snow warning for Donegal, Mayo, Sligo, Leitrim and Roscommon is in place until 3pm.
Universities, schools and childcare services in these nine counties have been advised to close today.
Some bridges and roads were closed last night ahead of the arrival of Storm Eunice and will remain closed until the worst of the weather has passed.
These include the N25 New Ross bypass and the Rose Fitzgerald Kennedy bridge in Co Wexford and the Longfields bridge near Mallow in Co Cork.
A section of the M8 Cork-Dublin motorway will remain closed until 9am.
Flights and ferry services as well as bus services are also affected and passengers are advised to check before departure.
Aer Lingus cancelled a number of flights out of Cork and Dublin between the UK and the Netherlands.
It said further disruption is also possible today as the storm tracks across the country with coastal flooding expected around western counties during high tide between 6 and 7am as Storm Eunice moves over Ireland.