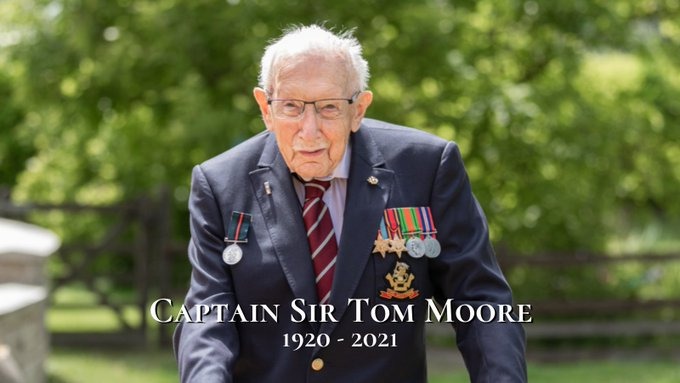 A proposed £150,000 CEO salary for Captain Tom’s daughter has led to an investigation by the Charity Commission

An investigation is reported to be underway into the charity that was set up in honour of Sir Captain Tom Moore. It comes after claims that its CEO, and daughter, Hannah Ingram-Moore, was to be paid a salary of £150,000 per year.

After receiving a request last year to permit this move, it was blocked by the Charity Commission watchdog. Had it been approved, her payment would have been equivalent to 13.68 per cent of the first year’s income made by the Captain Tom Foundation.
As reported by The Independent, it was the foundation’s trustees who proposed the appointment of Ms Ingram-Moore as CEO, and it was made without a recruitment drive, and without any alternative competition for the role.
Accounts for the charity show that on February 1 last year, Ms Ingram-Moore was appointed a trustee, but she then resigned on March 15, reportedly telling them that ‘the role was not something she wished to pursue’.
On the same date, her husband Colin was also appointed as a trustee, and he currently remains as the family’s representative.
Putting the salary into perspective, a top earner at another charity, the RSPCA, can earn a salary of £150,000 a year, but then, they are believed to have an annual income of around £142million, ten times what the Captain Tom Foundation makes.
It is known that a clause in the Charity Commission’s rules states that trustees and people connected to a charity must first ask for written permission before being granted a position. The foundation did seek this permission in advance to appoint Ms Ingram-Moore.
Stephen Jones, the Chair of The Board of Trustees, said in a statement that ‘The Foundation has engaged actively and positively with the Charity Commission since registration, and any discussions are highly confidential between them and the Trustees’.

‘In 2021, the Foundation approached the Commission for consent (as required in law and under the Foundation’s governing document) with regard to the appointment of Hannah Ingram-Moore as CEO’.

‘This was provided to the Commission as part of the application for consent, in the interests of full disclosure, together with a proposal by the Trustees as to what the salary for the CEO role should be’.

‘It is the Commission’s responsibility to consider and challenge any application for consent, but in any event, during the Trustees discussions with the Commission, Hannah Ingram-Moore took the decision that the CEO role was not something she wished to pursue, as she wanted to focus on other commitments, both personally and professionally’.

‘However, she committed to support the Trustees during an interim period, subject to Commission consent being obtained’.

The Charity Commission confirmed its investigation, saying, ‘We have been in ongoing contact with the trustees of the Captain Tom Foundation on its set-up and governance arrangements, and as part of this work will now assess the charity’s recently submitted accounts’.

It should be pointed that the watchdog pointed out that although an investigation is being conducted, it in no way implies that any wrong-doing has occurred, as reported by metro.co.uk.