From the stands: Elche vs Rayo Vallecano in La Liga 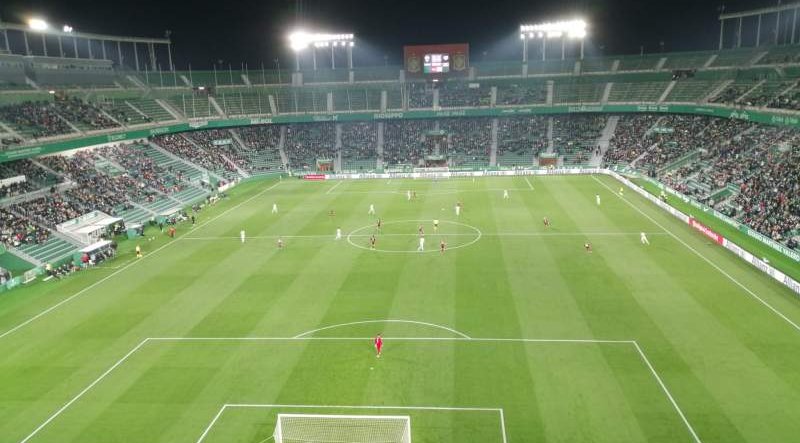 From the stands: Elche vs Rayo Vallecano in La Liga. Credit: EWN

From the stands: Elche vs Rayo Vallecano in La Liga on Friday, February 18.

ON Friday, February 18 at 9 pm, I was lucky enough to be sitting in the stands for the Elche vs Rayo Vallecano La Liga clash – my first taste of Spanish league football and only my second visit to the Estadio Manuel Martinez Valero.
After taking the mighty Real Madrid to extra time in an exciting Copa del Ray in January, I was anticipating another spirited performance from the home side and they did not disappoint.
However, Elche were very slow in getting into the game. Rayo, who came into the game a couple of places and points above the home side in the league table, dominated the first half.
The away side were quicker to the ball, had higher energy and looked more dangerous. But it was Elche, who against the run of play, had the best opportunity to open the scoring.
After a good sequence of passes, former Southampton player Guido Carrillo put 32-year-old Fidel Chaves through on goal, however, a poor first touch allowed Luca Zidane, son of legendary Real Madrid player Zinedine, to come out and collect the ball.
And it was Elche who had the next best chance. Fidel was once again in the thick of the action. His free-kick from just outside the Vallecano box was delivered temptingly across a crowded penalty area and was met by the head of 29-year-old old Enzo Roco, who fired his header straight at Zidane junior.
Rayo responded with a flowing attack led by former Real Madrid youngster Fran García, who sent a beautiful pass into the path of Sergi Guardiola,30, who floated a cross into the area, which somehow escaped the Rayo attackers.

Half-time 0-0.
The stadium was only half full but the atmosphere was that of a full house. The Elche fans, although a little disappointed by their team’s first-half performance, were still buzzing at the break.
The kick-off for the second half was met with loud cheers and anticipation that things can only get better after a rather lacklustre display in the opening 45 minutes.
However, it was the away team that started stronger and were rewarded with a goal in the 52nd minute.
Isi Palazón nodded into the path of Fran García inside the Elche box and fired a beautiful shot into the top corner of the net, leaving Elche keeper Édgar Badía with no chance.

Rayo 1-0.
Despite the setback, the fans in attendance didn’t give up on their team in white. In fact, they seemed to step up their support, which resulted in Elche stepping up their efforts.
But as the game pushed on it appeared that despite the enthusiasm of the home fans, the away team were going to walk out winners – something they hadn’t done in their three previous visits to the Martinez Valero.
Elche kept pressing and regained control of possession. Then in the 77th minute, Elche gave the home fans something to cheer about. A great move in which Pere Milla hit the post was followed up by Guido Carillo who put the ball into the back of the net.
1-1.
With that goal, the game changed. Elche looked confident and it was Rayo’s turn to look unsure at the back.
But sloppy defending from Elche allowed the away side a golden opportunity to take the lead, against the run of play.
Rayo found themselves with a free kick in the 82nd minute, just outside the Elche box. The crowd anticipated something big and they were not wrong.
Isi Palazón stepped up to hit the dead ball but it hit the wall and it bounced fortuitously for Elche’s Pere Milla, who found himself leading a surprise Elche counterattack.

The speed of the break was like watching Barcelona or Madrid.
Milla raced up the field and fed 24-year-old Ezequiel Ponce who cleverly managed to slot the ball past Luca to give Elche the lead and send the home fans into a frenzy.
Elche 2-1.
And despite a tense end to the game, which saw Vallecano throw on former Chelsea and Manchester United forward Radamel Falcao in the hopes of conjuring up some late magic, Elche managed to see out the six minutes of extra time and end the game triumphantly.
Jubilant celebrations met the final whistle as the vocal home fans rejoiced in their side’s victory and left the ground extremely fulfilled with the night’s entertainment.

Overall, despite a slow start, the game grew into life and being among the Elche fans as they celebrated their team’s victory was worth more than the €22 I paid for my ticket.