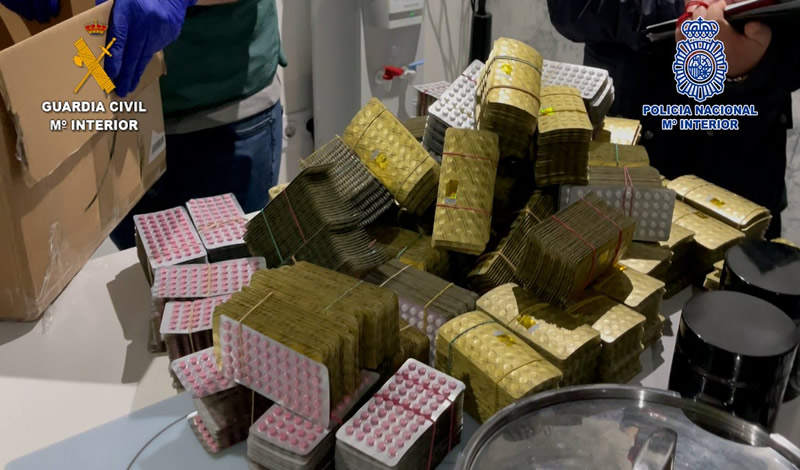 The Guardia Civil, in a joint operation with the National Police, has dismantled in the Sevillian municipality of Dos Hermanas, one of Andalucia’s most active criminal gangs.
Those investigated are suspected of being related to more than 50 robberies, committed in less than 3 months, in the provinces of Sevilla, Cadiz, Malaga, Cordoba, Jaen, Granada, Almeria, and Ciudad Real.
Seven members of this criminal organisation were detained, all known to have an intense criminal activity, capable of robbing up to six businesses in the same night.
More than 30 vehicles – most of them high-end – used to carry out large-scale robberies have been recovered. The value of seized stolen effects exceeds €1 million.
Their investigation began at the beginning of November, when officers learned of the theft of 10 high-end vehicles from a dealership in the Sevillian town of Bormujos.
After the first inquiries, officers verified the relationship between the theft of large displacement vehicles and the assaults on establishments and industrial buildings.
A multitude of high-value products were stolen in these thefts, especially high-end bicycles, and motorcycles, for their subsequent illicit distribution in the market.
As the investigation gathered pace, officers verified that behind the theft of the vehicles was the criminal network formed by those now detained, who used said vehicles to rob the establishments previously chosen as targets by the gang.
Cars were parked on public roads with forged number plates, where they were kept “cooling” until used. Another use for the stolen vehicles was in offering them as a means of payment to other criminal organisations for various criminal purposes.
Seven searches were finally conducted, where the police uncovered and confiscated two vehicles, a motorcycle, two high-end bicycles – valued at more than €4,000 each – pyrotechnic material used in the robberies with force, and a large amount of anabolic steroids.
Among those arrested is the alleged leader of the gang, responsible for coordinating all the assaults, and maintaining the group’s internal discipline. The detainees subsequently appeared before a court, with four of them being sent to prison, while the rest were released with charges.