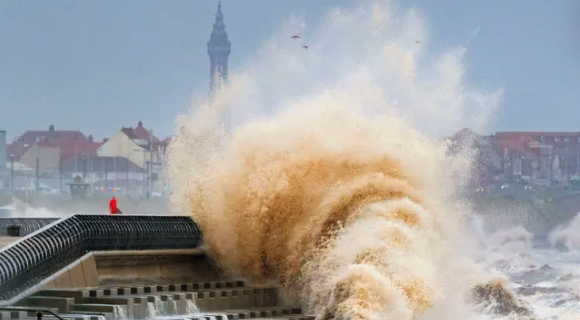 Storm Eunice whilst not causing as much damage as originally thought possible, it has resulted in the death of eight people and leaves thousands of businesses and homes without power.
One of the worst storms to hit the UK in years, Eunice disrupted travel, uprooted trees, removed roofs and knocked out power lines.
As of last night some 230, 000 homes were still without power with the transport secretary saying he expected travel disruption for “another day or two”.
Grant Shapps said: “Trains are in the wrong locations, there’s still debris being removed from our roads. Airports are expected to be very busy with people catching up with flights and potentially queues at ports.”
Continuing he said teams had worked through the night to get road and rail networks back up and running after the “once in a century” storm, with many train operators extended warnings not to travel into Saturday. These warnings include Southern, Thameslink and Great Northern networks, although some routes are set reopen later this afternoon.
South Western Railway said it expected considerable disruption across its network on Saturday morning, while Great Western Railway services are suspended until at least 10:00 GMT.
Some Greater Anglia routes have reopened with a limited service, but the rail firm reiterated advice not to travel and that many other routes remained suspended until further notice.
The M4 Prince of Wales Bridge and the Humber Bridge have reopened, but the M48 Severn Bridge will remain closed due to the forecast of further high winds.
The red warning issued for Friday has been reduced to a less-severe yellow wind warning for much of the south coast of England and south Wales and will remain in place until 18:00 GMT on Saturday.
A yellow alert for ice had been in place for most of Scotland and parts of northern England until 9:00. Three flood warnings were still in place in England on Saturday morning
The Met Office said the latest warning could hamper recovery efforts from the storm.
Areas in the UK suffering outages include:

A small number of homes remain without power elsewhere across the country with Storm Eunice having caused some localised damage.