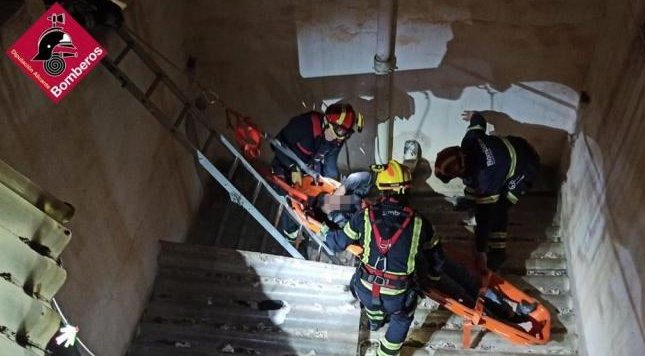 Epic fail: Woman tries to make ‘skylight’ party entrance in Spain.
According to reports, the accident happened when a woman was trying to enter a house party via an unconventional entry point. The woman ended up falling 15 metres. She broke her leg and possibly her hip too in the fall.
According to the provincial police force, the emergency services received a call on Sunday, February 20 at 4:31am. The caller told them that a woman had fallen at a property on Calle Alcalde Manuel Alberola.
Rescuers were greeted with a technically difficult rescue operation. The rescuers used ropes to climb down to the injured woman. The firefighters had to be careful not to destabilise the area or move the victim accidentally.
When the rescuers had gained access to the woman she was given strong pain relief. She was suffering from a multitude of bruises and a broken leg. Her rescuers thought that she had also broken her hip in the fall.
The woman was immobilised and then the Fire Brigade came up with a plan for how to extricate her. The emergency services used the escalator to hoist the immobilised woman up.
She was then transferred to an ambulance and rushed to the hospital. The incident was attended by a command and headquarters unit, a rescue van, and a heavy urban pump. Multiple firefighters from the Elda fire station had rushed to rescue the woman.
The rescue mission was completed in the space of a few hours. No further details are known on the woman’s injuries.