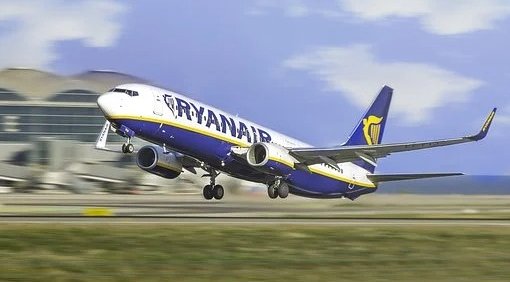 Trapped passenger blasts Ryanair after plane runs out of sick bags and passengers are still charged for water.
One Ryanair passenger was furious when she was charged for water after being trapped on-board. The flight had been heading from Cork to London but due to Storm Eunice, it was diverted to Edinburgh.
One passenger told CorkBEO: “They gave us two options when we landed in Edinburgh, they said that we could get off the plane and find our own transport out of our own pockets, or stay on the plane and wait.
“About nine people got off the plane. We landed in Scotland at 2pm and left at about 5pm. We were just sitting there for three hours, they wouldn’t let us off.
“They had the front door open for air but they were still charging people for water and food.
“When it had tried to land in London earlier people were getting sick, they ran out of sick bags and even then people needed water and they were charging for it.
“When it diverted nobody knew what was going on. They just said they were trying to sort something and once they finally said we were going to Edinburgh people were like ‘can we just go back to Cork?’ There was no real plan.”
The passenger went on to add: “From embarking in Cork to finally getting off in London we spent eight hours on the plane. I had my four-year-old son with me and there were a lot of other kids on board too.
“Eight hours is a long time to be sat there, but when you’re a child it’s really really long.”
Ryanair claimed that the problems were out of its control. The budget airline reportedly emailed passengers and said it had: “made all reasonable efforts to prevent and reduce the flight delay, and understand the inconvenience it may have caused.
“We sincerely apologise that your flight FR9852 from Cork to London was diverted to Edinburgh on 18-02-2022.
“We are committed to providing on time services for all passengers, but exceptionally there are situations outside of our control that affect our flight operations.
“Passengers’ well-being is important to us and we try our best to minimise the inconvenience of flight disruptions while complying with EU Regulation 261/2004.
“We again apologise for the delay of your flight.”