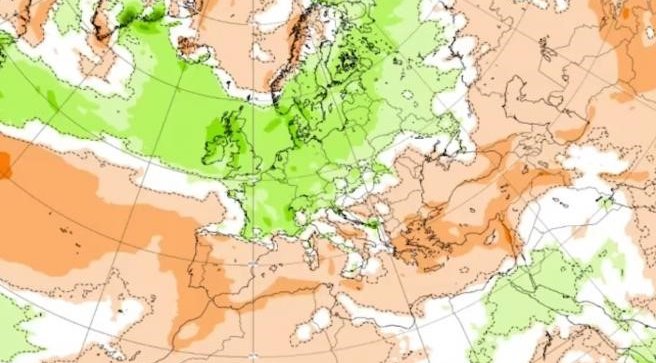 Storm Franklin which reached the UK and Ireland this morning is due to arrive in Spain later this week bringing with it strong winds and 7m high waves, orange warnings having been issued by AEMET for five regions.
Reports in the UK talk of gusts of up to 140kmh once again cutting electricity for some, with more than 30,000 homes still without electricity today.
In the Netherlands , Franklin is causing damage in various parts of the country, especially by falling trees damaging vehicles, buildings and roads Strong winds are expected to continue until Monday night.
The previous storms resulted in some 80,000 homes being without electricity in Spain, with the latest storm about to bring further damage.
Spain and storm Franklin
The storm has reached the Cantabrian coast where strong winds are being experienced putting eight communities in the northeast of the peninsula on alert. Wind gusts of 90kmh have been experienced as have large waves and a storm surge.
The State Meteorological Agency (Aemet) has put in orange alerts in Asturias , Cantabria , Catalonia, Galicia and the Basque Country due to combination of the storm surge and the waves that can reach between 5 and 7 meters on the north coast.
An orange warning is also in place for Catalonia where winds of up to 90kmh are expected in  the southern pre-coastal area of Tarragona, while the Pyrenees of Lleida are at a yellow level due.
Yellow alerts have also been put in place for Aragón and the Valencian Community due to strong wind. Wind gusts of up 90kmh are expected around Huesca and in the interior of the province surrounding Castellon.
Andalusia is on yellow alert until mid-morning due to coastal phenomena on the Cadiz coast and in the Strait, where a force 7 easterly wind will blow.
Storm Franklin is not likely to cause the same level of disruption as the prior storms but as it will be bringing strong winds residents are asked to be cautious and to take the necessary precautions.