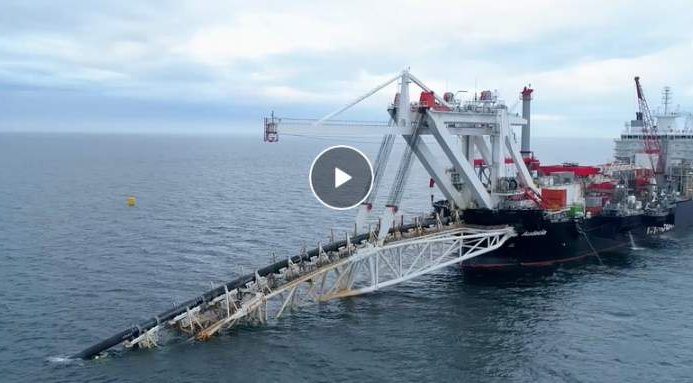 The German Ministry of Economic Affairs has said that in view of the Russian aggression in eastern Ukraine, the government will halt the controversial Russia Nord Stream 2 gas pipeline certification.
The undersea pipeline would see gas from Russia making its way to Northern Europe faster and cheaper, and the delay in the certification will hurt Russia who currently pay the Ukraine vast sums of money for gas that is piped through the country.
Chancellor Olaf Scholz (SPD) said in Berlin on Tuesday that he had asked the Federal Ministry of Economics to take the necessary administrative steps to prevent certification of the gas pipeline for the time being, “And without this certification, Nord Stream 2 cannot go into operation.”
He said it was clear that the situation now had to be reassessed, and that “all the questions that concern us had to be taken into account”.
According to Der Spiegel the Federal Economics Minister Robert Habeck (Greens) wrote a letter on Tuesday morning instructing the Federal Network Agency, which reports to him, to withdraw an originally positive certificate that is crucial for the pending certification of the pipeline.
The certificate issued by the previous government was intended to provide the country with a more secure supply of gas, however at the time of issuing the certificate the situation in the Ukraine had not become inflamed.
The letter from Habeck says geostrategic situation under which the approval was given has changed and in view of the escalation in eastern Ukraine, the letter now states. “Approval without this certificate is not possible.”
Vice-Chancellor Habeck had been preparing this step for months in view of the Russian troop build-up on the Ukrainian border. In principle, Habeck had never shared the view of the old German government, however in recent weeks, he has convinced Chancellor Scholz and the coalition partner SPD to do so.
The Federal Ministry of Economics and Technology will now investigate what the situation in the Ukraine means for supply security.
No natural gas has flowed through the 1230-kilometre-long double strand of pipeline with the certification procedure recently on hold. Last November, the Federal Network Agency suspended the procedure for the time being and demanded that the operating company be organised according to German law. Nord Stream 2 AG intends to comply with this requirement by founding a German subsidiary.
The decision by the German government to halt Nord Stream 2 gas pipeline will reduce the security of supply to the country but will at the same time hurt the pockets of Russia, and could be viewed as the first of the German sanctions that might follow this crises.