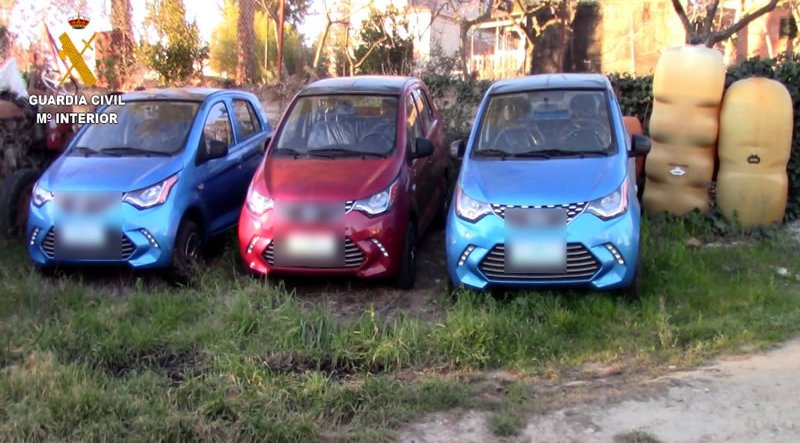 The Guardia Civil, thanks to ‘Operation Exemplum’, has dismantled a network dedicated to the import of vehicles of Asian origin carrying false Certificates of Conformity (CoC).
This investigation began when the Guardia Civil received information about a company located in Barcelona, which was importing vehicles from the Asian market, carrying a CoC, whose data did not coincide with those of the vehicle itself.
Specifically, the homologation password that appeared on the documentation did not match the make, model and type of vehicle, nor did it belong to the manufacturer that was supposedly issuing it.
The vehicles in question are category L6e, known as “microcars”, which can be driven with a driver’s licence, by minors over 15 years of age, when in fact, due to their dimensions, weights, speed and homologations, they should be classified as L7e, which requires a category B driving licence to be used.
In order to do this, the businessman who imported the vehicles had the collaboration of an ITV station located in the province of Barcelona. Its inspectors, and technical director, examined only the basic data, and without making the correct checks, provided him with the Technical Inspection Card necessary to market them in Spain.
After this step, they went to the Provincial Traffic Headquarters of Barcelona and Tarragona, where they obtained the driving licence.
The people who bought the vehicles were deceived into thinking that they were buying vehicles that could be driven with an AM licence, when in reality, due to the size of the vehicles, a higher class B licence was required to drive them, with the consequent risk to road safety, as they were driving large vehicles with an inappropriate licence.
Investigating officers took evidence from the injured parties who had acquired these “microcars”. They withdrew the technical inspection card and the registration certificate issued, and informed them that until they legalised the vehicle correctly, they could not drive it. Where appropriate, they also had to obtain the correct driving licence.
Both documents were sent to the bodies that issue them (Direccion General de Trafico, and Ministerio de Industria, Comercio y Turismo), in order to request their revocation, while all the vehicles that posed a serious risk to road safety have been withdrawn from circulation.
One person has been arrested for the alleged offences of false documentation, and fraud against the market and consumers (misleading advertising), and the Technical Director of the ITV was detained for false documentation.
Also, 11 ITV workers are being investigated, also for false documentation. The main person under investigation has obtained, thanks to the fraudulent importation and sale of these vehicles, profits of more than €350,000.