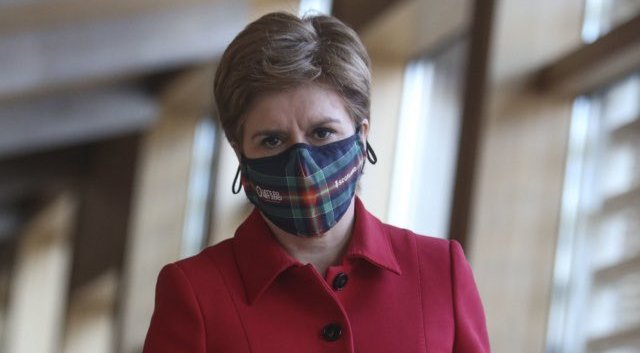 Nicola Sturgeon, the First Minister for Scotland, announced today that the country’s Covid-19 passport scheme would end next Monday, bringing to an end the certification process. In the same announcement she said that from March 21, face coverings will no long be required indoors in some settings.
The decisions were announced as part of the Scottish government’s plans for managing the pandemic with a new “strategic framework”, that will see masks retained in indoor settings like on public transport but not elsewhere.
Covid-19 guidance will no longer be required to be followed by places of worship, businesses and service providers, and customer contact details will no longer have to be kept for the purposes of contact tracing.
All other restrictions will also end on the same date as the end of the certification scheme.
The first minister outlined her government’s commitment to “continued access to PCR and lateral flow testing free of charge where we transition to a system of testing that is more targeted”.
She said: “The only immediate change we’re making to current arrangements on lateral flow tests for the general population is in our advice on the frequency of testing.
“Instead of advice to test before going anywhere to mix with others, we will from Monday next week revert to advice to test at least twice a week, and in particular, if you’re going to a crowded place or mixing with someone who’s clinically vulnerable.”
She added that in March the government would publish a detailed plan for testing: “describing the scale of infrastructure that will remain in place for the longer term.” There would be a “transition period” beyond the end of March when the system will operate “on the same basis”.
Its duration will be outlined next month.
Ms Sturgeon said she was waiting for clarity on how much funding would be available to Scotland from the Westminster government to support continued free testing.
She said it is “reasonable” to “move away from mass population-wide asymptomatic testing” to a “more targeted system”.
She confirmed that, in contrast to Prime Minister Boris Johnson’s plan, those who test positive for the virus would continue to self-isolate “for now”.
She said her government would continue to make self-isolation support payments to those who are eligible.
She finished saying: “Today’s new framework is an important moment in our recovery,” she said.
“It marks the point at which we move away hopefully sustainably from legal restrictions and rely instead on sensible behaviours, adaptations and mitigation.
“A return to normality must, though, go hand in hand with a continuing determination to look after each other.
“All of us have a part to play in ensuring a safe and a sustainable recovery.”
The announcement that Scotland is to end certification scheme follows the announcement the earlier announcement by Boris Johnson that all restrictions will be removed.