Skipper reveals what caused the sinking of the Galician fishing boat 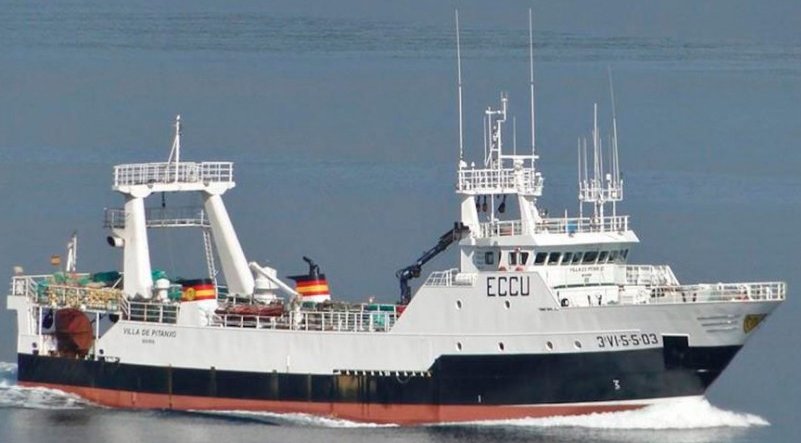 The skipper of the Galician fishing boat that sunk of Newfoundland has said the cause of the sinking was a “sudden” stoppage of the main engine. The statement from the skipper of the Villa de Pitanxo, Juan Padín, was released by the shipping company Pesquerías Nores who said that the engines had died during a turning manoeuvre.

According to the statement the ship was left with no propulsion or steering as a result of the engine’s failure, exposing it to the winds and the waves. It continues saying that the waves battered the ship which listed to the side and sank “very quickly”.

Yesterday the ship owners met with the families of the deceased and the missing crew to update them on the repatriation of the bodies, and to bring them up to date with what they know about the tragedy.

They have furthermore assured the families of their “willingness” to encourage the tracking tasks to resume “as soon as possible” and to find out the possible causes of the tragic accident.

After the two hour long meeting, the, the daughter of the chief engineer, María José de Pazo, explained that the families have demanded that the ship owner support their request to resume the search “for the 12 that are missing“, because it is “the priority today”.

Julio Torres, a close friend of Samuel Kwesi (another survivor), confirmed that the company has promised to maintain “pressure at all levels” to resume these tasks and later to fully investigate the causes of the tragedy”.

Pressure has been put on the owners to make use of the relatively good weather to restart the searches, as a matter of urgency.

Torres said that there are many unexplained issues one of which is that the owners have apparently not yet spoken directly to the survivors, but importantly the owners do accept their responsibilities in repatriating survivors, finding the missing and investigating the cause.

The shipwreck of this fishing boat, based in Marin, occurred on February 15, about 450 kilometres from Newfoundland . Of the 24 crew members of the ship, three were rescued alive , Juan Padín, his nephew Eduardo Rial Padín and the sailor of Ghanaian origin Samuel Kwesi), and the bodies of another 9 sailors were recovered : Rogelio Franco, Miguel Lumbres, Diego Andrés Moré, Daniel Fernando Moré, William Arévalo Pérez, Ricardo Alfonso Cruz Flores, José Antonio Cordero, Fernando Santomé, and Apaanah Pelungo Zure.

The President of the Government, Pedro Sánchez, has said that the Canadian authorities will help in the recovery of the sailors who have not yet been located after the sinking of the fishing vessel

“As soon as favourable conditions occur, the Canadian authorities have said that they will help the recovery of the fishermen who have unfortunately died on these coasts,” Sánchez said at a press conference from Moncloa together with the Danish Prime Minister, Mette Frederiksen.

The full causes and circumstances of Galician fishing boat tragedy will need to be investigated in full, with the reasons the skipper gave as the cause of the sinking being just one of the issues that may have contributed to the tragedy.