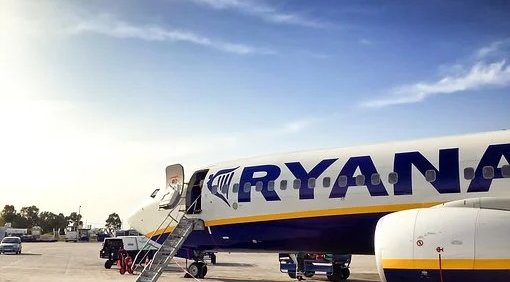 A family were stranded in the wrong country after a Ryanair mix-up. The family had been expecting to fly home from Fuerteventura.
A Ryanair mix-up reportedly left a pregnant woman and her family stranded in France. She was left “crying all day” due to the mistake. Tia Watson had been heading home from Fuerteventura with her family. The flight home was booked for February 18, in the wake of Storm Eunice.
The plane attempted to land at Manchester airport but due to safety issues, it was diverted to the south of France.
Speaking to Nottinghamshire Live Tia explained how the family was put up in a hotel for the night.
Tia revealed: “We received a text on Friday night to say ‘we apologise for your overnight delay, your new flight time will be 7.40pm on Saturday evening local time’.
“So obviously we went to sleep, had breakfast and said ‘we’re not going to set an alarm or anything’ as we thought the flight was half-seven at night.”
When the family ventured into the hotel’s restaurant for breakfast they discovered that they were the only people there off the original flight.
Tia added: “We thought this was really weird because the flight we were on was full and there were hundreds of people in our hotel.
“Reception told us that they all got picked up on free coaches this morning.
“We assumed that everyone had been told the correct flight and we’re the only ones that had received the error.”
The family headed to the airport for the 7:40pm flight but when they arrived no such flight was showing on the departures list. They were told by Ryanair that the only flight to the UK had left that morning.
Tia tried to resolve the issue by ringing the airline.
She explained: “Then they said there’s a flight today [Sunday, February 20] so they want us to lug all of our stuff to the airport again, three hours before the flight, go through check-in and everything, on the off-chance that three people don’t show up.
“That’s stressful in itself.”
Tia went on to add: “My partner is a reception teacher in Arnold and he’s had to contact the headteacher and let him know. It’s a nightmare.
“We’ve got absolutely nothing now.
“We were in Fuerteventura so we obviously only packed summer clothes so now we’re in 8C weather in dresses and sandals with no money, no clothes.
“If I don’t laugh, I will cry. Yesterday I was just crying all day.”
The family finally made it back to the UK on February 20.