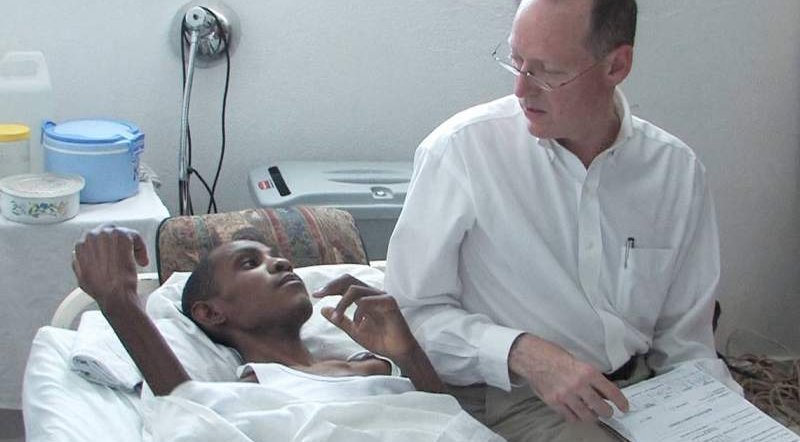 GLOBAL health pioneer Paul Farmer dies aged 62 following an “acute cardiac event,” according to Partners in Health, the global public health organisation that Dr Farmer helped found. Former US president Bill Clinton has led tributes following the deaths of the American medical anthropologist and physician.
Farmer was co-founder and chief strategist of Partners In Health, a Boston-based nonprofit health care organisation, and was also a humanitarian who gained global acclaim for his work delivering high-quality health care to some of the world’s poorest people, according to the New York Times.
A statement from Partners In Health confirmed the tragic death: “Partners In Health founder, Dr Paul Farmer, unexpectedly passed away on Monday, February 21 in Rwanda from an acute cardiac event while he was sleeping.”
Partners In Health CEO Dr Sheila Davis released the following statement: “Paul Farmer’s loss is devastating, but his vision for the world will live on through Partners in Health. Paul taught all those around him the power of accompaniment, love for one another, and solidarity. Our deepest sympathies are with his family.”
Dr Farmer, who was once described as “the man who would cure the world”, received the Peace Abbey Foundation Courage of Conscience Award in 2007 for saving lives by providing free health care to people in the world’s poorest communities and working to improve health care systems globally.
Tributes flooded social media following the announcement of his death.
Former US president Bill Clinton wrote: “Chelsea, Hillary, and I are devastated by the sudden passing of our dear friend Dr Paul Farmer.
“Paul was one of the most extraordinary people we have ever known. His pioneering work with Partners In Health touched millions of lives, advanced global health equity, and fundamentally changed the way health care is delivered in the most impoverished places on Earth. He was brilliant, passionate, kind, and humble.
“He saw every day as a new opportunity to teach, learn, give, and serve—and it was impossible to spend any amount of time with him and not feel the same.
“Our family is profoundly grateful to have benefited from his many gifts for more than 20 years, going back to the time Chelsea read his work at Stanford, reached out to him, and gained his mentorship and friendship,” you can read the full statement here.
Professor Senait Fisseha wrote: “The purpose of life is to be useful, to be honourable, to be compassionate, to have it make some difference that you have lived and lived well.” — Ralph Waldo Emerson.
“You have lived and lived well, my friend. The world is a much better place because of you. RIP”.
Jesuit priest James Martin said: “The idea that some lives matter less is the root of all that is wrong with the world.”
“RIP Paul Farmer”.
“Dr Paul Farmer invested his time, knowledge, energy and resources to walk with Rwanda on her healing journey after the Genocide against the Tutsi. May his soul rest in perfect peace,” another person said.
Brigham and Women’s Hospital, for which Dr Farmer worked as chief of the Division of Global Health Equity wrote: “Our community is heartbroken by the news of the passing of Dr Paul Farmer, a compassionate leader, colleague and humanitarian, who improved the lives of so many, near and far. Our thoughts are with his family and all those fortunate enough to have known this remarkable person.”