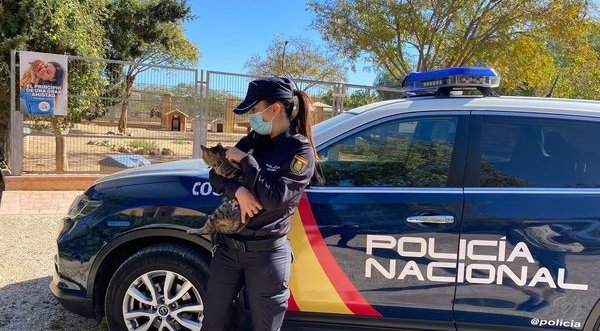 Police have arrested a 29-year-old man in Alicante for kicking a cat, charging him with the crime of animal abuse. The man is alleged to have kicked the cat when he found it hiding under his vehicle.
It is understood that the cat had taken refuge under the car after it had escaped from its owner’s home. The domestic cat was injured in the incident which was reported to police in January, resulting in the man’s arrest earlier this month.
According to the police, the owner of the cat arrived at the house and did not find it there, so she went down the street to look for it. When she came out of her door she was surprised to see a crowd of people near her house, along with the Local Police and members of the Animal Shelter.
When approaching them, the woman saw that a policewoman was carrying her cat. She told them that it was her pet at which point they told her it had been injured after it was attacked by the man who has been arrested.
Two eyewitnesses told her that they had seen an individual who was looking under his vehicle and, after finding the cat hidden under it, began to kick him. The cat however didn’t leave, at which point he drove off leaving the injured animal in the road.
These witnesses provided the owner of the animal with the license plate of the vehicle enabling the police to trace him.
The woman had to take her cat to the vet several times due to the injuries caused by the aggression, so days later, on January 6, she decided to file a complaint with the National Police.
Officers from the Judicial Police Operative Group of the Central Alicante Police Station took charge of the investigations and after interviewing all the witnesses traced the man and arrested him.
According to the veterinary report, the cat had lesions in the digestive system and lack of mobility in the hind legs or non-ambulatory parapesia of acute onset due to trauma, and an improvement in its health status is expected thanks to the prompt attention it received.
The arrested man is of Spanish nationality has a prior record for other crimes.
Such crimes in the future will be tried under the reform of the Criminal Code promoted by the General Directorate of Animal Protection approved Friday, that toughens penalties for abuse up to 2 years in prison resulting in death and 18 months if it involves veterinary care.
For anyone sceptical about whether the police would enforce the new animal abuse laws, their arrest of a man for kicking a cat will give them added comfort.