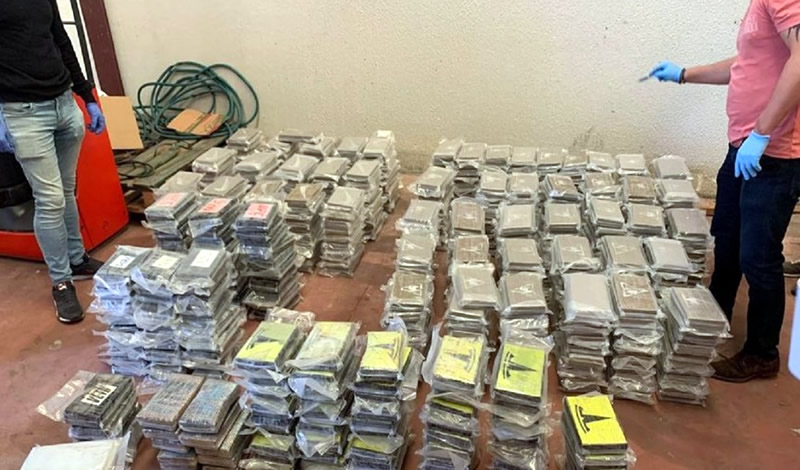 An operation carried out by the National Police, in collaboration with Customs Surveillance has resulted in the discovery of 750 kilos of cocaine with an estimated street value of €27m hidden among pineapples in a warehouse in the Malaga municipality of Alhaurin de la Torre.
Five people have been arrested in connection with this discovery inside a container of fruit that had arrived in the port of Malaga from Colombia in South America. These individuals are believed to have been operating a conglomerate of companies specifically for the import of drugs.
The organisation allegedly had an infrastructure that allowed them to operate in other port facilities throughout Spain. This particular operation focused on the ports of Malaga and Valencia.
During the operation, around €35,000 in cash was seized, as well as documentation that could prove vital to proving the group’s links to crimes such as money laundering.
Those detained include the administrators of three instrumental companies, with two Spanish citizens, two Italians, and a woman of Romanian nationality.

Initiated last July, the National Police were alerted to a suspicious container that had left Colombia, bound for the port of Malaga. They were informed that it contained legal merchandise of coconut substrate that could be hiding an important cache of cocaine .
Investigations showed that several people linked to the companies involved in the shipment had a long history related to drug trafficking. The container arrived at the port of Malaga at the end of July, but the gang members did not make a move until 20 days later. They were observed moving it to a facility they had rented in Alhaurin de la Torre.
In August, officers observed how the merchandise was again loaded and transported to a landfill in the Murcian town of Molina de Segura, where the coconut substrate was abandoned.
Another container followed the same route in mid-September, arriving by sea to Malaga port. On this occasion, the coconut substrate was transferred directly to the Molina de Segura landfill.

Surveillance on the Alhaurin de la Torre warehouse in November saw workers handling boxes of pineapples, which is when the cops pounced. At the entrance to the facility, they seized numerous black bags containing packets of cocaine hydrochloride, subsequently found to contain 639 packages, weighing 747.60 kilos.
The man removing the pineapples was arrested – later found to have a criminal record -along with the lorry driver who had transported them. A third man escaped and is being hunted, with an international arrest warrant in place against him.
In phase two of the operation, the administrators and managers of the instrumental companies used by the organisation to introduce the cocaine into Spain were arrested, as reported by laopiniondemalaga.es.