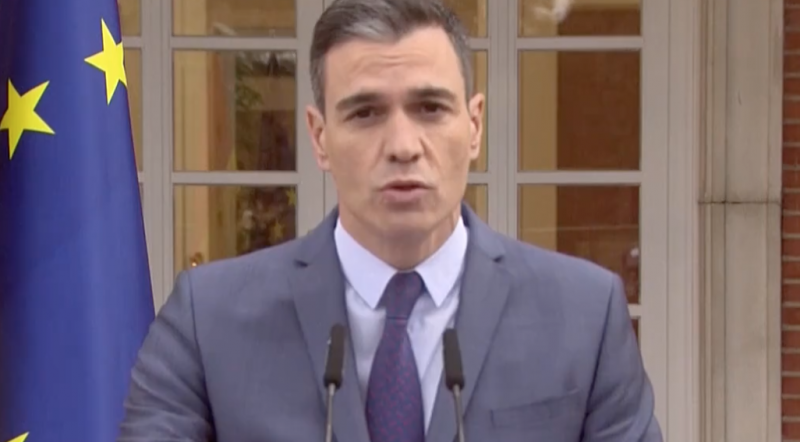 Pedro Sánchez rules out direct shipment of weapons to Ukraine

JUST IN: Pedro Sánchez issues an important statement on the Russia-Ukraine conflict.

FOLLOWING a meeting of the National Security Council regarding the Russia-Ukraine conflict, Spanish President Pedro Sánchez issues an important statement regarding the shocking events.
The president addressed the nation on Thursday, February 24, in which he condemned the attacks from Russia and hoped to restore peace to Europe.
“We condemn the intolerable military actions of the Russian government on Ukrainian territory. The values we share with Europe will guide us through this crisis,” he said.
“Spain will defend international legality, will go out of its way to restore peace and will show solidarity with the affected areas.”
According to the president, the Government of Spain, in collaboration with our European partners, is going to provide the necessary help to the Spaniards who remain in Ukraine.
Around 320 Spaniards are believed to left in Ukraine after hundreds returned to the country before the fighting broke out.
Sánchez continued: “Spain has supported the diplomatic route to the extreme to reach a solution and avoid the escalation of the war in Ukraine.
“Now, we must maintain unity in our country and in the EU. We believe in democracy, in the rule of law, in a world based on rules and in peace.”
Speaking about the economic impact the conflict between Ukraine and Russia will have on his country, Sánchez said: “At this point, we recognised that the conflict and the sanctions that derive from it are going to have, without a doubt, an economic impact on our country and on the European Union (EU), especially on the energy markets.
“The Government of Spain, in coordination with the EU, has been preparing for some time as many measures as are necessary to mitigate the economic impact, including the energy impact, of this crisis on Spanish society, on its companies, their homes, industry and economic recovery that we are starting.”