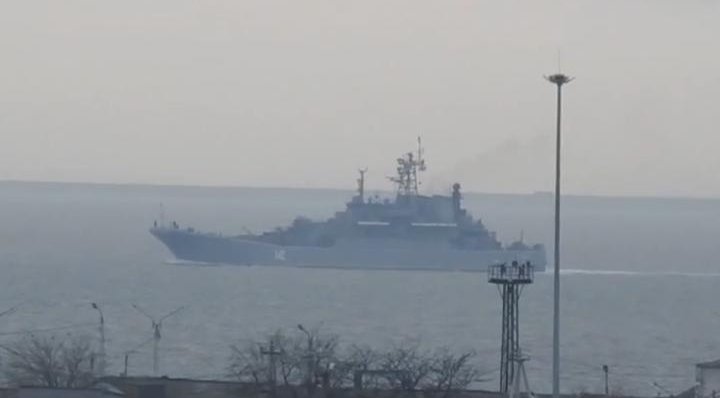 TWO Russian civilian cargo ships have been reportedly hit by a Ukrainian missile strike in the Sea of Azov, resulting in casualties, according to Russian news agency TASS.
The Kuban border service also reported the incident in a statement.
“At 11 am [local time] on February 24, 2022, Russian civilian cargo ships SGV-FLOT and SERAPHIM SAROVSKIY were subjected to a missile attack by the Armed Forces of Ukraine in the waters of the Sea of ​​Azov. The missiles were fired from Mariupol”, the border service reported.
The border service reported that the missile attack damaged the SGV-FLOT cargo ship resulting in a blaze breaking out on board the vessel that has left one crew member serious injuries. The fires were put out by the crew, both vessels are continuing their journey, the service said.
Ukraine has yet to respond to reports of the attack.
Some people on social media have accused Russia of promoting propaganda with this report, citing that Ukraine are currently battling Russian troops in the city of Kyiv, which has come under attack from a second wave of missile strikes.
Although it is not just Kyiv that has reported explosions.
According to reports, at least 18 people have been killed in a missile attack on Odessa, southern Ukraine. While a large explosion was reported in Dnipro, Ukraine.
NATO said air, land and sea forces will support Ukrainian forces on the eastern flank of the country after Ukraine President Volodymyr Zelensky called for world leaders to provide defence assistance and help protect the country’s airspace from Russia.