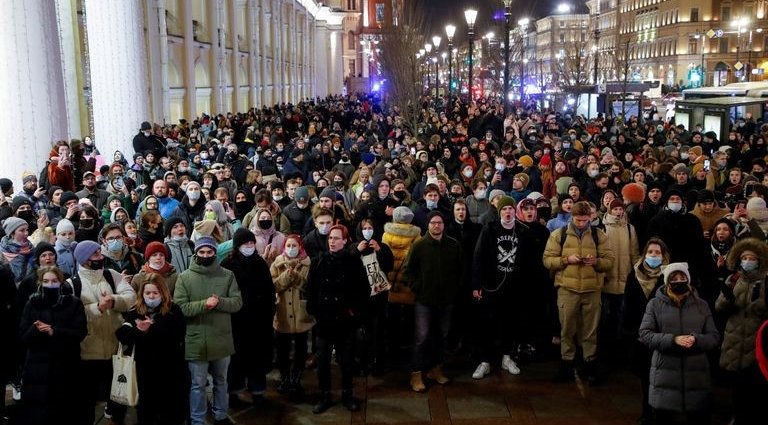 While Russian President Vladimir Putin would like to have the world believe that the country is united in its attack on the Ukraine, anger has been growing as more and more public figures speak out and anti-war protesters are arrested.
Protests have been held across more than 50 cities in Russia with more than 1,000 people arrested in Moscow alone as well as a number of public figures.
Included in those that have spoken out are Yelena Kovalskaya, a director of a state funded theatre, who announced on Facebook that she was quitting her job, saying how it is “impossible to work for a killer and get paid by him.”
Others who expressed their dissatisfaction include Engineer Yekaterina Kuznetsova who said: “This is the most shameful and terrible day in my life. My country is an aggressor.
“I hate Putin. What else should be done to make people open their eyes?”
Marina Litvinovich, a human rights activist urged Russians to take to the streets to show their opposition to the violence unfolding saying in a Facebook video: “We, the Russian people, are against the war Putin has unleashed.
“We don’t support this war, it is being waged not on our behalf.”
Ms Litvinovich is among those that have been detained.
A petition started by prominent human rights advocate Lev Ponomavyov has been signed by more than 330,000 within hours of being launched, with more than 250 journalists adding their names to an open letter decrying the aggression.
Another letter was signed by around 250 scientists, while almost 200 municipal council members in Moscow and other cities backed a third letter.
With the anti-war protesters arrested and the anger grows in Russia, these events have been mirrored across Europe and the world, with countries as diverse as Afghanistan and the US calling for a cessation of the hostilities.