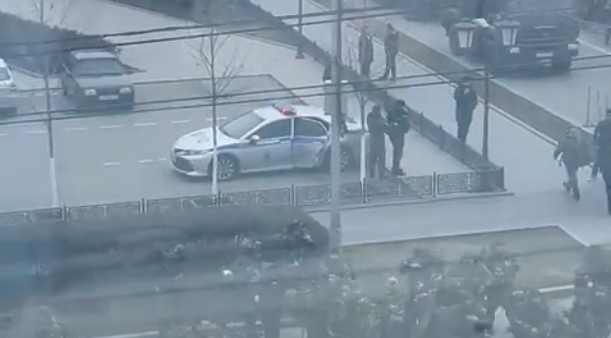 CHECHEN kill squads have been readied and are being mobilised at the behest of Russian President Vladimir Putin, as Russia plans to take down Kyiv, according to the Russian news outlet Baza.
The news outlet reports that Chechen paramilitary (known as Kadyrovites) have mobilised and are ready to head to the Ukrainian capital and claim the city.
Guardian journalist Neil Hauer has shared footage of Chechen forces mobilising in Grozny, Russia.
The Daily Mail is reporting that the soldiers have been set the specific task of eliminating Ukrainian government officials and have reportedly been given a special “deck of cards” with their photos and descriptions on.
Hauer notes that “one of the primary utilities of Chechen forces for Putin is that Russian public will care much less if they are killed (than ethnic Russians).
“Much greater political tolerance for casualties,” he said on Twitter.
The news of Chechen troops being readied will worry Ukrainian President Volodymyr Zelensky, who has already seen Russian troops enter Kyiv via the Obolon district. Mr Zelensky said on the morning of Friday, February 25 that Putin plans to take the capital and then kill him.
In a video statement recorded against a backdrop of the official Ukrainian crest, the president, clad in a khaki t-shirt, said: “According to our information, the enemy marked me as target No 1, my family as target No 2. They want to destroy Ukraine politically by destroying the head of state. We have information that enemy sabotage groups have entered Kyiv.”

The Russian news outlet Baza has shared this video, saying that it shows 10,000 Chechen security officials in Grozny preparing for deployment to Ukraine. https://t.co/8g4QwD7p2e pic.twitter.com/jcji0LSXQS