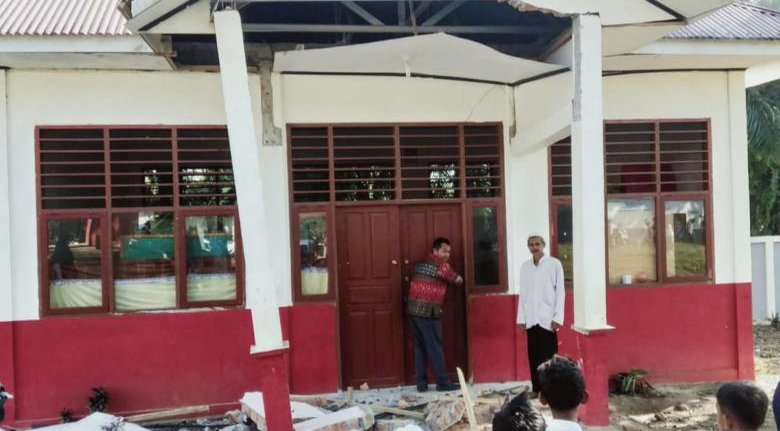 TWO people have been found dead after a powerful 6.2 magnitude earthquake rocked West Sumatra, Indonesia on Friday, February 25. No tsunami warning has been issued despite the strong quake.
The earthquake struck the West Pasaman Regency in West Sumatra shortly after 9.30 am (local time) on February 25 which also caused a number of damaged houses and school buildings, according to local reports. Aftershock tremors could be felt in neighboring Singapore and Malaysia.
“We continue to monitor and advise people to remain on alert,” Dwikorita Karnawati, the head of Indonesia’s geophysics agency BMKG, told MetroTV.
Indonesia’s disaster mitigation agency chief Suharyanto said at least two people were killed and some buildings including a government office, homes and a bank sustained damage.
According to the Meteorology, Climatology, and Geophysics Agency’s (BMKG) official statement, the “earthquake was 18 kilometres northeast of West Pasaman at a depth of 10 kilometres.” A hospital was evacuated in West Pasaman.
“People gathered outside their homes and workplaces. They were scared of the tremors. Cables were shaking,” said Frans Kiky Nainggolan, a shopkeeper living in Riau province.
Speaking to the local press, Ilham, a volunteer with the Indonesian Red Cross said: “A number of school buildings were damaged.
“Currently we are still collecting data in the field.”
Places of worship were also damaged by the earthquake as well as people’s homes.
One local resident in Simpang Empat said: “It felt so strong we all ran out of our houses.” The same resident said that two earthquakes hit, with the second one stronger than the first.
The tremors were felt in Malaysia where a fire department in the capital Kuala Lumpur received multiple calls on tremors felt in the city.
No injuries, deaths or damage has been reported.
Hilfa Akmal, a resident in Subang Jaya on Kuala Lumpur’s outskirts, told Reuters: “I felt the tremors for 1-2 minutes… We evacuated fast and others from another floor also.”