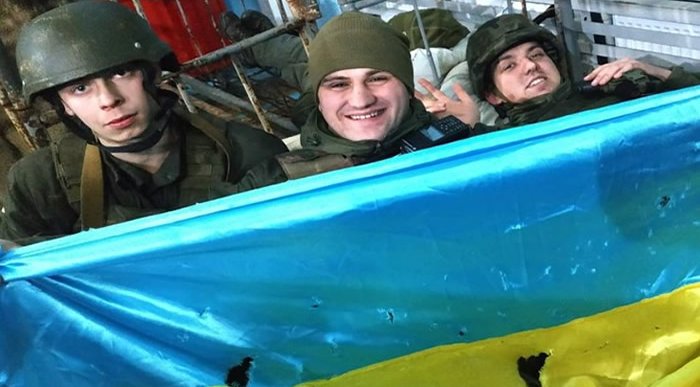 According to the Kyiv Independent, Ukraine’s Deputy Interior Minister Anton Herashchenko, claimed late on Thursday evening, February 24, that Antonov Airport, located in Hostomel, has been retaken, and is back in the hands of the Ukrainian military.

Russian special forces had attacked and were believed to have seized control of the airport after a battle earlier in the day. The airport, just 20 miles from the centre of Kyiv, is seen as a strategic location for Putin to be able to bring more supplies into the country.
Elite airborne forces had parachuted into the area to take the airport, but met with fierce resistance from soldiers, including members of Ukraine’s National Guard. A tweet posted by the National Guard showed an image of three young soldiers holding up a Ukrainian flag riddled with bullet holes.

“Guardsmen with their flag, torn to pieces after today’s battle”, it was captioned. Adding, “Congratulations to all of you and say that we will win!”.

CNN reporter Matthew Chance had an incredible experience when he headed to Hostomel to cover the assault on the airport. His crew obtained astonishing footage as the battle raged. At one point he approached what he thought were Ukrainian forces, only to be told they were in fact Russian special forces.

Volodymyr Zelensky, the Ukrainian president, from his secret bunker, ordered that all men aged between 18 and 60 were prohibited from leaving the country, and that there was now compulsory military enlistment. In a statement, he claimed that the ‘enemy has an extremely low morale’.

As explosions continued all around the capital, General George Joulwan, the now-retired, former commander of NATO forces during the Balkan war, said he thought Kyiv would fall to the Russians within 24 to 36 hours, as reported by dailymail.co.uk.

CNN's Matthew Chance reports from an airbase outside the Ukrainian capital of Kyiv, where Russian airborne troops are engaged in a fire fight with the Ukrainian military https://t.co/TaPomIUP26 pic.twitter.com/rSye7nzmbi