Russia-Ukraine conflict latest – Who has said what 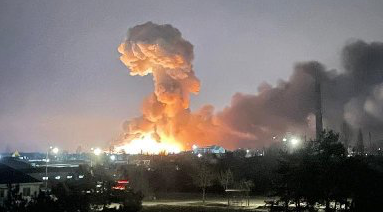 Russia-Ukraine conflict latest – Who has said what.

AS the Russia-Ukraine conflict intensifies, Euro Weekly News takes a look at the latest words from world leaders and experts.
An adviser to President Volodymyr Zelensky has told Reuters that the government of Ukraine is still after a peaceful reconciliation to the conflict and are open to negotiating with Russia.
The advisor said that the Ukrainian government is “not afraid” to talk, particularly on Ukraine having “neutral status”.
However, Russia’s foreign minister Sergey Lavrov told reporters that Ukrainian President Volodymyr Zelensky is lying when he says he wants to discuss the country’s neutral status, and that “no one is planning to occupy Ukraine”.
Meanwhile, President Zelensky himself said that he held talks with UK Prime Minister Boris Johnson and EU President Ursula von der Leyen about the “insidious attacks on Kyiv”.
“Ukraine needs the support of partners more than ever. We demand effective counteraction to the Russian Federation. Sanctions must be further strengthened,” the president said after speaking to Boris Johnson.
After speaking to Ursula von der Leyen, Zelensky revealed that he told her that “not all possibilities for sanctions have been exhausted yet. The pressure on Russia must increase. I am grateful to the President for her decision on additional financial assistance.”
Interestingly, former Ukrainian government minister Oleksandr Danylyuk has said that the sanctions have been “too soft” and had just “provided almost an incentive for Russia to do more”.
“I’m just wondering whether these people actually care at all about Ukrainians,” he told Sky News.
“If not Ukrainians, maybe they should care about their own nations because death will come to them as well.”
Elsewhere, UK’s Defence Minister Ben Wallace has told the BBC that will not be putting boots on the ground in Ukraine for fear of a European war.
“I cannot trigger a European war and I won’t trigger a European war,” he said.
Wallace said that the decision was not about “risk” but to avoid triggering a “war across Europe”.
“It’s not about risk, as much as I care for my personnel. It’s not about risk,” he said.
“It’s about if we were to directly attack Russian aircraft, we would have a war across Europe.”
He continued: “I have said continually for a long time, as has Britain, and the prime minister has supported this position, that Putin is not rational.
“He is trying to invade Ukraine. He won’t stop after he’s done with Ukraine. He will use everything in the Baltic states. He doesn’t believe the Baltic states are really countries.
“And we will have to stand up to it. Now, I cannot trigger a European war and I won’t trigger a European war. But what I will do is help Ukraine fight every street with every piece of equipment we can get to them, and we will support them, and that is the reality.”