Ukraine fights back against Putin's forces 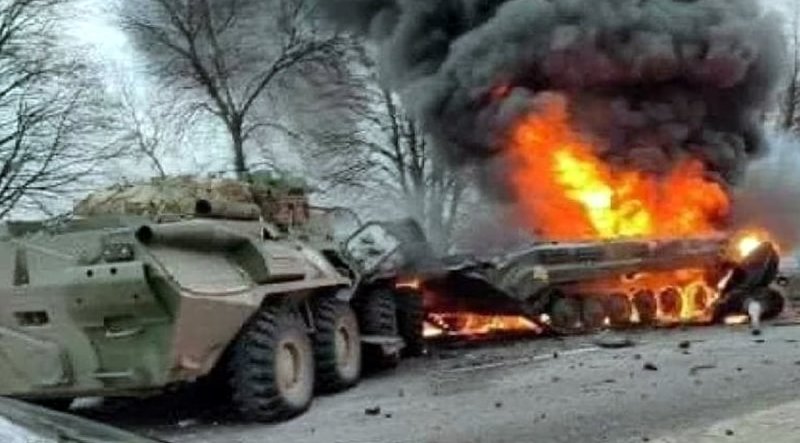 Ukraine fights back against Putin's forces. image: land forces of the armed forces of ukraine

In response to the Russian invasion, Ukraine has fought back against Putin’s forces

Despite being severely outnumbered and outdated in every way, military forces in Ukraine have been fighting back against the Russian invaders today, Thursday, February 24. According to reports, a total of five helicopters have been taken down.

Battles have been raging all over the country, with the capital, Kyiv, coming under fire, along with the port cities of Mariupol, and Odessa in the south. Russian military poured in from the northern border with Belarus, whilst the cities of Donetsk and Luhansk in the east also came under attack. Other areas in the east, around Kherson, and the Dneiper River were also hit.
During a battle for Gostomel airbase, a squadron of 20 KA-52 Alligator attack helicopters attempted to take the runway. Ukrainian forces claim their fighter jets shot down at least four of them, with a fifth needing to make an emergency landing after being hit.
In the eastern Donbass region, six Russian jets were reportedly shot out of the sky, and another plane was seen falling out of the sky near Kyiv.

In a statement carried by Russian news agencies, the defence ministry reported that “During a planned flight to transport military equipment, an An-26 aircraft of the Russian aerospace forces crashed”, simply adding, ‘The crew died’. An equipment failure was blamed for the crash in the southern Voronezh region near the Ukraine border.

Later in the afternoon, near the eastern city of Glukhov, using the American Javelin PTRK anti-tank missiles, another 15 tanks were damaged or destroyed.

According to Ukrainian officials, fighting in the east of Ukraine, outside the city of Kharkiv, reportedly ended with dozens of Russian troops being captured. A BMP fighting vehicle and its crew of four were reported captured in the same eastern region near Luhansk.

The whole platoon of the 74th brigade of motorcycle rifles, apparently surrendered, according to the Ukrainian commander-in-chief. Posting an image online of a man – believed to be the officer in charge of the platoon – Konstantin Buynichev is alleged to have said, “Nobody thought that we were going to kill. We were not going to fight – we were collecting information”.
One Ukrainian official estimated the Russian death toll as being around 50, as reported by dailymail.co.uk.