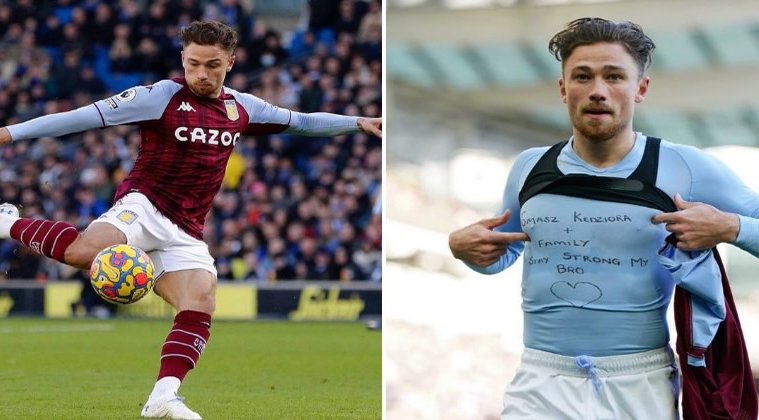 Matty Cash lifted his shirt to display a message on his T-shirt to a teammate stranded in Ukraine, and was booked

Premier League footballer Matty Cash scored the opening goal today, Saturday, February 26, for his club Aston Villa, in their splendid 2-0 away win against Brighton, but was then booked, as reported by The Sun.

Cash promptly celebrated by taking off his jersey to display a message written on his T-shirt underneath to former Polish teammate Tomasz Kedziora. The 27-year-old Pole is currently playing as a defender for Dynamo Kyiv, in the capital of war-torn Ukraine. The message read, ‘Tomasz Kedziora + family, stay strong bro’.

Following strict FA rules about players removing their shirts, referee John Brooks had no option but to give Cash a yellow card. Brooks’ action caused controversy in the Sky Sports studios, who were covering the match.

Presenter Jeff Stelling roundly criticised Brooks for being an ‘inexperienced’ Premier League official, and urged the FA to scrap the booking. “He’s been booked for it! John Brooks is an inexperienced Premier League referee”, exclaimed Stelling.

Users on social media were quick to comment, although to be fair to the referee, he was only following guidelines laid down by the FA. One user commented, “Is the ref joking? That is actually ridiculous”, while another wrote, “It is the law to be booked for that, but the inexperienced ref could have shown some compassion and common sense and let him off”.

Comments followed, with quite a debate going on, “Obviously the ref doesn’t want to give the yellow but it’s literally the rule he has to”, wrote one person.

Another responded, “Taking off your shirt is a yellow whatever the message under it may be. There is enough interpretation in this game already without having to consider what the message is before booking someone for taking his shirt off”.

"They should just ignore that"

Matty Cash was booked for taking his shirt off to display a message in support of people in Ukraine 🇺🇦 pic.twitter.com/SNuDyGq3SZ