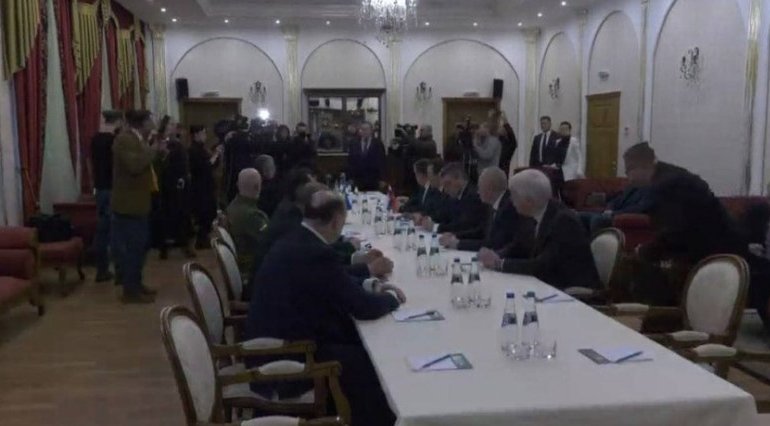 Moscow and Kyiv will meet for a third round of talks on Monday 7. image: [email protected]

While peace talks between diplomats from Moscow and Kyiv took place today, Monday, February 28, in Gomel, near the border between Ukraine and Belarus, convoys of Belarusian military vehicles were observed heading towards the border.

The talks came to an end without any positive conclusion, and further negotiations are apparently scheduled in the next few days. It is believed that they will return to their respective capitals to discuss what was spoken about at the meeting.

“We have identified certain points from which we can predict general positions”, a Russian official commented afterwards. It is known that a full ceasefire had been requested by the Ukrainian government, but Moscow had not offered any indication of what their negotiations would include.

The Ukrainian defence minister had attended the meeting, along with the deputy minister of foreign affairs, and one of President Zelenskyy’s top advisors. In what would appear to be a total mockery of the situation, Moscow’s delegation was headed by Putin’s adviser on culture.

Vlodymyr Zelensky had last night already admitted that he was not confident of the talks proving positive, but wanted them to go ahead for the sake of his nation. He had been understandably reticent about Belarus being the location, and had asked for the talks to take place in Istanbul, Baku, or Warsaw instead.

Belarus had already been used by Vladimir Putin as a staging ground for part of the invasion of Ukraine. Earlier today there were reports of the movement of long columns of Belarusian military vehicles heading towards the Ukrainian border, with some observers hinting that Belarus could be about to enter into the conflict, as reported by dailymail.co.uk.