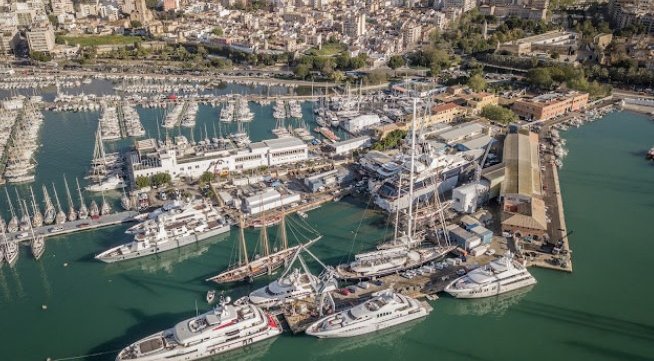 A Russian mega yacht that is moored up in the Balearic island port of Palma de Mallorca could face sanctions from the EU. The €150 million ‘Tango’ belongs to Russian businessman Viktor Vekselberg, known to be a close friend of Vladimir Putin.

The stunning vessel is reportedly currently undergoing its normal annual maintenance work at Astilleros, in Mallorca, but last weekend, the EU and the United States announced corrective packages against large Russian businessmen close to the country’s government, as a response to the invasion of Ukraine.

In the early hours of this morning, workers were reported to be going about their work on the boat. Boxes of material were seen being taken in and out of the 77-metre yacht in several batches.

‘Tango’ arrived in Palma on January 30 from Fethiye, Turkey, and is docked in Ciutat. Her four engines allow her to reach an impressive speed of 22 knots. Fourteen guests, and 20 crew can be accommodated, in seven cabins. Its luxuries include a swimming pool, a massage and beauty salon, and a spacious terrace with an open-air cinema.

According to La Vanguardia, another Russian mega-yacht, the Galactica, which docked in Barcelona, set sail in a hurry last Saturday 26 at noon heading for Tivat. That is a port located in Montenegro, a territory that no longer belongs to the EU.

Spain has already proposed to its European partners that all ports should be closed off to Russian ships, in the same way that the EU has implemented the ban on landing and taking off of Russian aircraft in European airspace.

“We are proposing a series of measures that range from the prohibition and export of ships, the prohibition of provisioning, and also the supply to Russian-flagged ships”, Transport Minister Raquel Sanchez said today, Monday, February 28, as reported by laprovincia.es.