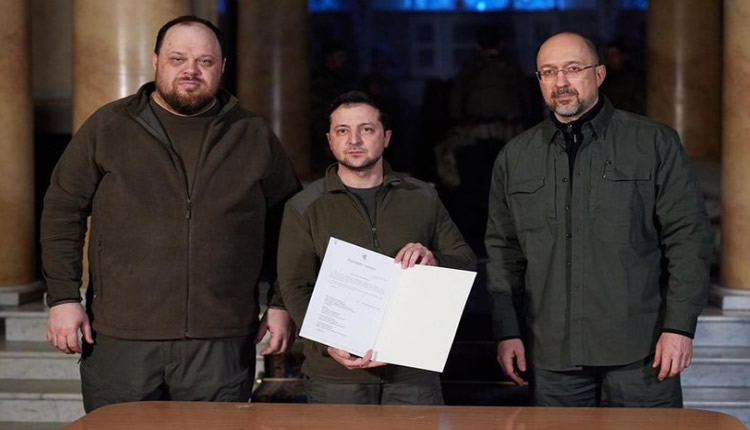 Volodymyr Zelenskyy, the President of Ukraine was pictured today, Monday, February 28, signing a document with an application for his country to have membership of the EU. He made an urgent appeal earlier today asking for the European Union to grant Ukraine immediate membership under a special procedure.

As a meeting aimed at peace talks between Moscow and Kyiv took place this morning on the border with Belarus, the 44-year-old President made another of his video messages.

“We appeal to the European Union for the immediate accession of Ukraine via a new special procedure. Our goal is to be together with all Europeans, and, most importantly, to be on an equal footing. I’m sure it’s fair. I’m sure it’s possible”, he said.

Another announcement in this morning’s address involved informing the nation that any Ukrainian currently serving time in prison, who has combat experience, will be allowed to serve their debt to society by being released and fighting against the Russian invaders on the front line.

“Under martial law, Ukrainians with real combat experience will be released from custody, and will be able to compensate for their guilt in the hottest spots of the conflict”, announced the President.

A senior EU official, speaking on condition of anonymity, said that Ukrainian membership was likely to be discussed in March during an informal summit.

“I think one of the reasons that this is important for President Zelenskyy is also potentially in some of the discussions with Russia on a way out”, he said.

‘On the application of Ukraine for EU membership, I think it’s important not to get ahead of ourselves. It obviously has not yet been received, but this whole question of the Ukraine situation is something that’s very much on the minds of the leaders”, as reported by dailymail.co.uk.