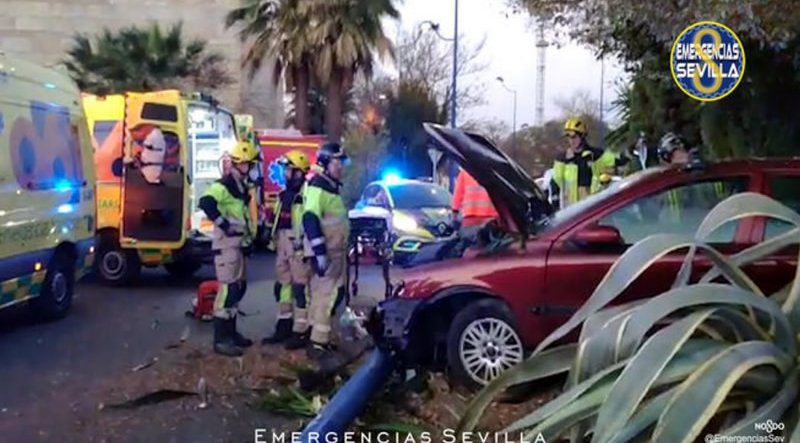 16-year-old girl killed in a traffic accident in Sevilla

A 16-year-old girl tragically died in a traffic accident in the city of Sevilla on Monday, February 28. The 22-year-old driver was arrested and subsequently tested positive for alcohol, according to diariodesevilla.es.

According to reports, a total of six people were travelling in the vehicle, when it only has a capacity for five persons. The deceased had allegedly been sitting on her brother’s lap in the front passenger seat, without a seatbelt, when the accident occurred.

One of the other passengers in the vehicle was one half of the famous Spanish pop duo, Los Gemeliers. He was unhurt in the accident.

This incident occurred at 7.15am on Monday, at the traffic island of La Cartuja, on Avenida Alvaro Alonso Barba, near to the Hotel Barcelo Renacimiento. It is believed the driver had been travelling at high speed, somehow leaving the road, crashing into a lamppost then a palm tree, which was ripped out by its roots with the impact of the vehicle.

Emergency services, including the fire brigade, and a 061 ambulance, arrived at the scene of the accident and medics from the ambulance service reportedly managed to revive the girl for several minutes. She was transferred to a hospital where she died shortly after.

In a breathalyser, the driver allegedly produced a result of around 0.40 mg/l of alcohol per litre of expired air. Once the girl’s death was confirmed, he was arrested at his home in Montequinto as the alleged perpetrator of a reckless murder.

He was placed before a judge and released without charges, despite the fact that the Road Safety Prosecutor’s Office had requested his admission to provisional prison.