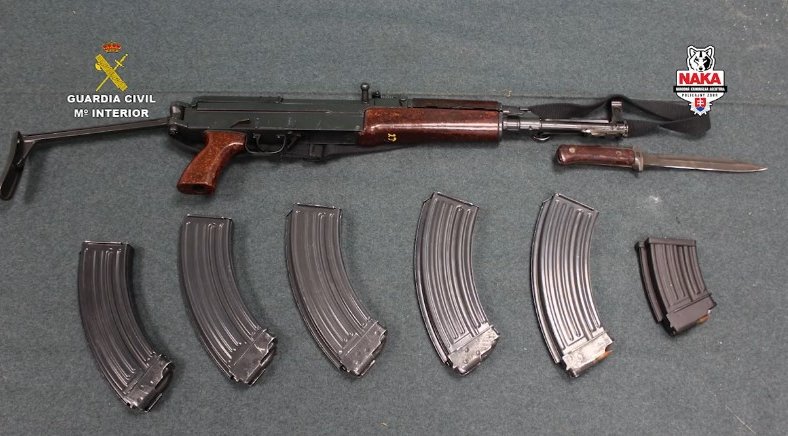 The Guardia Civil, in collaboration with the Slovak Police – the National Crime Agency – have conducted ‘Operation Leonidas’, in which they travelled to Bratislava, the capital of Slovakia, to assist in the arrest of a resident of Granada.

The man had gone to that country in order to purchase pistols, AK47-type assault rifles, and ammunition. His known intention was to sell these weapons on the illegal market in Spain.

An investigation had been launched back in 2021 between the Information Headquarters (UCE3) of the Guardia Civil, and the Slovak National Crime Agency. It was carried out through Europol, and coordinated by EUROJUST, which allowed for the identification of this Spanish citizen, with a previous police record for crimes, assault, and drug use.

Investigations in Spain linked the detainee to drug trafficking gangs on the Costa del Sol, to whom he was suspected of selling the weapons.

Once he arrived in Bratislava, the Slovak police proceeded to arrest him as he was about to collect the weapons. They also confiscated his vehicle, equipped with a double bottom, in which he intended to transfer the weapons to Spain. He was found to be carrying a significant amount of cash that he had hidden in the vehicle, presumably to pay for the weapons.

In a coordinated simultaneous raid, Granada police officers raided the man’s home. There they seized two kilos of hashish and marijuana, as well as different computer devices, and various documentation.

After being placed at the disposal of the Bratislava judicial authorities, the detainee was imprisoned for arms trafficking, as reported by granadadigital.es.