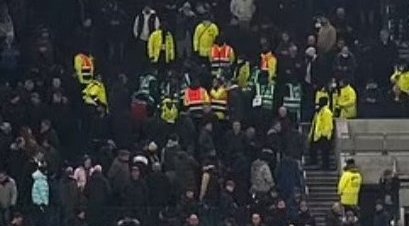 Sheffield Wednesday and Burton Albion hit with another medical emergency in the stands.

Sheffield Wednesday and Burton Albion were hit with another medical emergency in the stands.

ANOTHER English Football League (EFL) was halted on Tuesday, March 1 for a medical emergency in the stands, worryingly both Sheffield Wednesday and Burton Albion were involved again.

Play was suspended at around the 40-minute mark during Wednesday’s League One game against Burton on March 1.

At the time, the Sheffield side tweeted: “The game has paused, as the medics are called over to the North Stand.”

After a 5 minute break, the game resumed.

However, this is not the first time this kind of incident has affected both clubs.

On November 27, 2021, a medical emergency happened in the stands during Sheffield Wednesday’s game against Wycombe Wanderers. Although other reports suggest that there may have been a disturbance in the crowd.

At the time, the Wednesday official Twitter account posted: “Play has stopped at Hillsborough [just before 3.30 pm], as the medical teams from both clubs are called to the North Stand.”

The March 1 incident was also not the first time a Burton Albion game had been affected. In fact, it was the second in as many weeks.

On February 22, their match against Sunderland was suspended for almost 50 minutes due to a medical emergency in Sunderland’s West Stand.

Also, another Burton game was halted on February 15 for the same reason.

This worrying trend in collapses inside football stadiums has been highlighted many times over this current season.

Tragically, some of the medical emergencies at grounds around the country have resulted in people suffering heart attacks or even dying.

In October 2021, a Newcastle fan collapsed during his team’s Premier League match against Tottenham at St James Park. Medics in the crowd rushed to help Alan George Smith, 80, after he suffered a cardiac arrest.

In December 2021, a fan collapsed after suffering a heart attack during a Chelsea vs Watford game at Vicarage Road, which resulted in the match being suspended for more than half an hour.

On January 29, Fulham fan Paul Parish tragically passed away after suffering a cardiac arrest while in the stands at Craven Cottage.