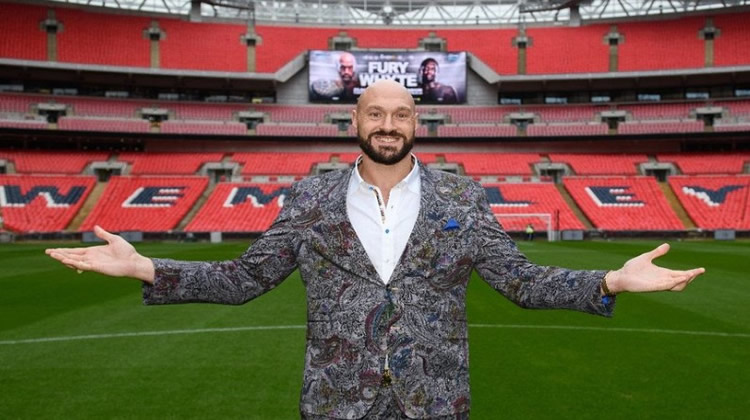 Tyson Fury claimed today, Tuesday, March 1, that he intends to retire from boxing after fighting Dillian Whyte at Wembley on April 23. The 33-year-old WBC champion was attending a press conference at Wembley to promote the April showdown when he made the announcement, according to thesun.co.uk.

Before his victory last October over Deontay Wilder, the Gipsy King had unveiled a plan that would incorporate five fights. The bout on April 23 against the Brixton ‘Body Snatcher’ was meant to be a step towards squaring up against the winner of the Anthony Joshua rematch with Oleksandr Usyk.

That would have seen him gain undisputed legendary status if he won that fight, with the WBC, IBF and WBO belts all at stake. If he follows through with today’s plan of retiring undefeated after the White clash, then we would sadly miss out on what would definitely be a titanic match-up with the winner of AJ and Usyk.

“This is the final fight of my career. I am retiring after this. I’ll have £150m in the bank, still be healthy, young and good-looking. I am going to buy a massive yacht abroad to go with the super-cars and properties I have all over the world”, said Fury at the press conference.

Adding, “I am going to sit back with a hot blonde and a pina colada thinking ‘you know what, I f***ing made it. Boom! I’ll sling some baby oil on and get a tan, that’s what world champions do”.

Whyte was a no-show at Wembley today, the 33-year-old allegedly not moving from his Portuguese training camp as he reportedly believed Tyson would not turn up for the press conference. The pair are still involved in a bitter rift over the purse for the heavyweight title fight.

Fury’s fans will be hoping he doesn’t carry out his retirement plan just yet, as this is not the first time he has threatened to hang his gloves up.

👊 JUST ANNOUNCED 👊
Tyson Fury will take on Dillian Whyte in Battle of the Brits at Wembley Stadium on 23 April, St George's Day!
📅 Official tickets will be available Wednesday 2 March at midday >> https://t.co/sD1QoUjG6G pic.twitter.com/jMpjx3Ttjs