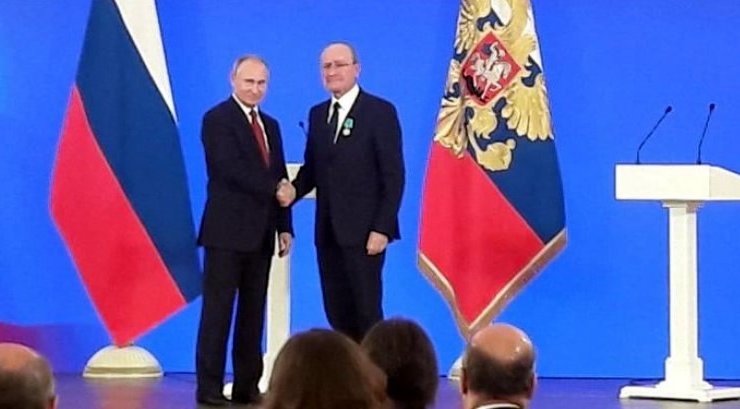 Mayor of Malaga, Francisco de la Torre, urged by the Junta de Andalucia to hand back the medal Putin gave to him

Francisco de la Torre, the mayor of Malaga has been left in a very difficult and uncomfortable position since the conflict broke out in Ukraine. In 2018, Russian President, Vladimir Putin gave him the Pushkin Medal, and amid the current crisis, the mayor is receiving messages demanding he gives the medal back.

He is also being asked to reconsider the future of the Russian Museum that is located in the capital. Today, Thursday, March 3, the Junta de Andalucia joined the call for a response from Francisco de la Torre over the Russian problem.

Juanma Moreno, the President of Andalucia has highlighted that the photo of the delivery of said medal to the mayor of Malaga in the Kremlin is “tremendously uncomfortable”, because it features “the person most responsible for barbarism” currently being committed in Ukraine.

In statements to Onda Cero, Moreno has urged De la Torre to “reflect” on the possibility of returning the decoration that was given to him for contributing to relations between Spain and Russia on the occasion of the Day of Popular Unity of the Russian Federation.

According to Moreno, it is “a personal decision of the mayor”, although he considers that given the circumstances, a photo of the councillor shaking hands with Putin is not “reasonable” or “sensible”.

“It is true that it is a mere symbol, but symbols and gestures also add up in this fight to isolate Putin, and try to make him see reason, so that he stops the invasion”, said the Andalusian president, who does share the position of the mayor regarding the importance of distinguishing “between Russia and the Russians, and their government and Putin, they have nothing to do with it”.

Juan Marin, the vice-President and Minister of Tourism, pointed out that it would be “a good gesture” not only to return the medal, but to consider any action that can “definitively isolate the Russian government, and make it realize once for all that what hit is doing is barbaric”.

Questioned about his position regarding the possible closure of the Russian Museum in the capital, the vice president has been blunt, “At this time there can be no rift. Everything that has to do with Russia, we have to turn our backs on it, absolutely everything”.

As Mr Marin summarised, “There is no other way than to make Putin feel alone, and isolated. He cannot have the support of absolutely anyone, much less the countries that are part of the European Union and NATO”, as reported by sevilla.abc.es.