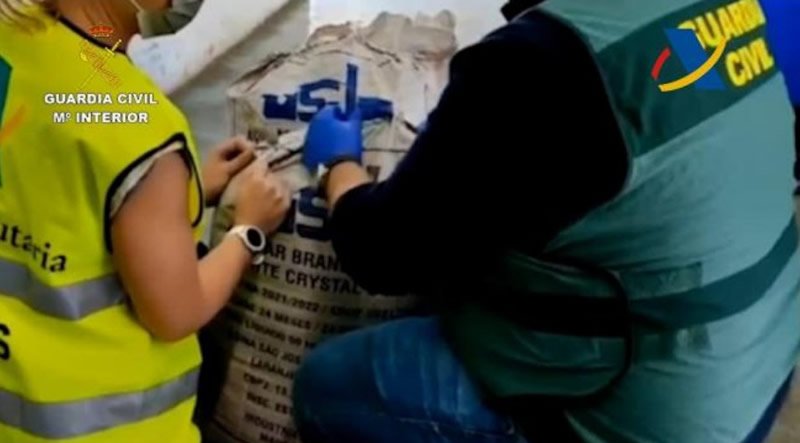 Container full of sugar with 100 kilos of cocaine inside seized in Las Palmas. image: guardia civil

Guardia Civil officers in the Las Palmas de Gran Canaria port of La Luz, in coordination with the Customs Surveillance of the Tax Agency, on February 21, seized two bags with about 100 kilos of cocaine hidden between bags of sugar in a container arriving from Brazil.

This is the second such intervention with the same characteristics that has been carried out in said port in recent days. On February 17, a total of 268 kilos of cocaine, also from Brazil, was reported seized, in a press release from the Guardia Civil.

These seizures, clarify the force, are the result of monitoring and joint surveillance carried out by both the Guardia Civil and the Tax Agency in the port facilities. In recent months this has led to exhaustive documentary analyses of the ships coming from Brazil, as well as of inspections of containers suspected of containing cocaine hidden among the sacks of sugar they were transporting.

On this occasion, a reconnaissance was carried out at the Border Inspection Centre of the port of La Luz, where, after extracting numerous bags from the container, two were observed that, although they seemed identical to the rest at first glance, had a different consistency to the touch.

After separating them, both packages were opened, and a small sample was extracted from each one, and after the corresponding narcotics test, the samples tested positive for cocaine.

Their modus operandi of transporting the cocaine in between sacks of sugar was a novel system the force remarked. Instead of the usual rectangular and compact blocks, the drug was in bulk inside the sacks, which they point out “made them more difficult to spot with the naked eye, as no differences could be seen to the rest of the packages”.

The narcotics have remained at the disposal of the corresponding judicial authority, while the authorities continue their investigation to identify and locate those implicated, as reported by 20minutos.es.