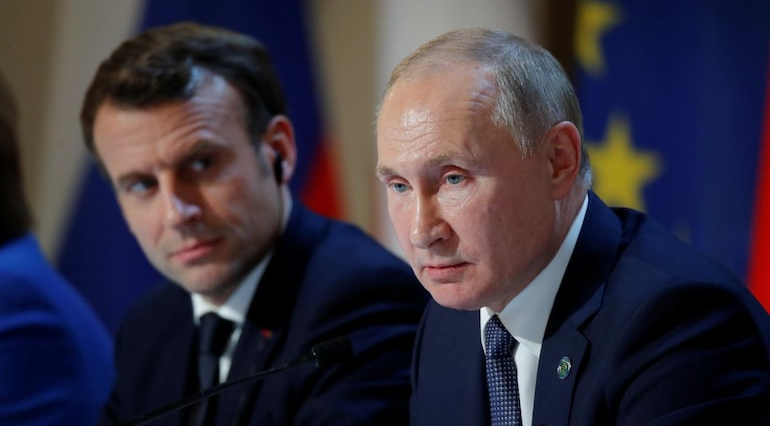 FRENCH President Emmanuel Macron has held talks on Thursday, March 3 with Russian President Vladimir Putin in an effort to find some common ground in order to stop the invasion of Ukraine. The talks are believed to have been the longest with the Russian leader since the start of the war.

On the eighth day of the Russian invasion of Ukraine, President Emmanuel Macron spoke with his Russian counterpart Vladimir Putin for 90 minutes. He then spoke with Ukrainian President Volodymyr Zelensky, the Elysée announced.

It has long been believed that President Macron holds the key to potential peace talks between Putin and his Ukrainian counterpart Zelensky.

The hour and a half long exchange with the Russian president is the third between the two men since the start of the invasion of Ukraine on February 24.

Negotiations between Russians and Ukrainians are due to resume on Thursday, March 3 at the Polish-Belarusian border.

The Ukrainian public will be hoping that talks are successful after the country has continued to suffer heavy casualties, especially in the last few days.

Ukraine’s capital was rocked by several large explosions in the early hours of March 3, with air raid sirens ringing out in Kyiv as Ukraine contines to suffer mass casualties.

On March 2, the historic city of Korosten, in the Zhytomyr region of Ukraine, came under siege with a TV tower and checkpoint being wiped out by Russian forces.

Then in the Ukrainian port city of Mariupol, hundreds of casualties were reported after intense fighting continued in the area on Wednesday, March 2.

On March 3, Ukraine’s strategic city of Kherson fell to Russian troops after succumbing to heavy pressure.

However, Ukraine has been fighting back.

A Russian fighter jet was shot down over northern Kyiv by Ukraine forces and Ukrainian troops have been battling bravely against Putin’s army to try to stop more cities from being taken.