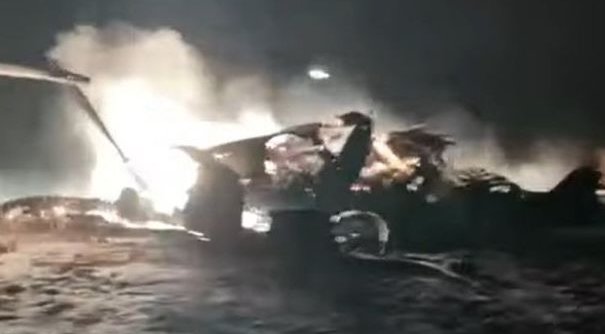 A ROMANIAN MiG-21 fighter jet disappeared off radar on Wednesday, March 2 while patrolling near the coast of the Black Sea and a rescue helicopter crashed, tragically killing seven soldiers.

The Romanian military lost contact with the MiG-21 aircraft in eastern Romania between the villages of Cogealac and Gura Dobrogei.

Soldiers from Romania, a NATO member, were then sent to search for the missing aircraft in an IAR 330-Puma helicopter, however, they were tragically killed trying to complete their mission.

“The pilot of the IAR 330-Puma helicopter sent to find him had reported unfavourable weather and had been called back to base before it too crashed,” said the Russian Ministry of Defence.

Sadly, the pilot of the MiG-21 LanceR aircraft was found dead on Thursday, March 3, as confirmed in a statement from the Romanian Army.

“Captain Costinel Iosif Niță, the pilot of the MiG-21 LanceR plane that crashed on Wednesday, March 2, in Constanța County, lost his life,” the statement read.

“The pilot was 31-years-old, married and had no children. He has been a pilot in the 861st Air Combat Squadron at 86th Air Base at Borcea since 2014 and had accumulated over 570 flight hours, of which approximately 420 on the LanceR MiG-21.”

The statement confirmed details about the crash, noting: “The plane, one of two MiG-21 LanceR planes performing air patrol missions over Dobrogea, crashed near Cogealac, in an uninhabited area.

“Radio connection between the plane and the control tower was lost at 20.00, and at 20.03 it disappeared from the radar, in an area between Cogealac and Gura Dobrogei,” the statement said.

“On Thursday, March 3, military and religious commemoration ceremonies for fallen soldiers will be held in all military units in the country and in those deployed outside the national territory,” it concluded.