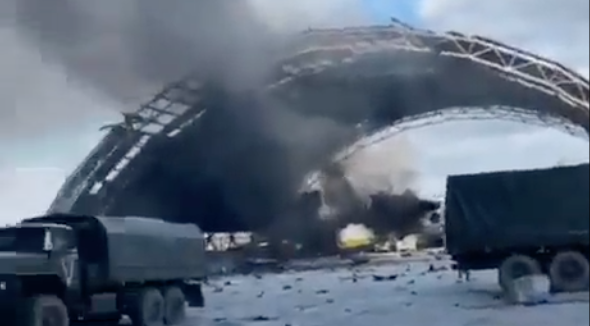 FIRST video footage has emerged showing the AN-225 Mriya, the world’s largest plane, destroyed in the Russia-Ukraine war.

The Antonov AN-225 Mriya is believed to have been destroyed at Hostomel airport, located on the outskirts of Kyiv, after the airport suffered airstrikes from Russian forces in the early days of the conflict in Ukraine. Videos have begun to circulate on social media showing the wreckage.

Images show the nose of the AN-225 on the ground, detached from the rest of the fuselage, one of the engines, and a dense column of smoke coming out of the hangar that appears to have been hit.

However, upon the appearance of the footage, the company indicated that it was not yet able to perform an inspection of the aircraft, so it decided not to validate the images.

In a statement, Antonov said: “NO NO NO NO… Currently, until the #AN225 has been inspected by experts, we cannot report on the technical condition of the aircraft.

“Please wait for the official announcements about the condition of the aircraft,” the company said.

Reports of the aircraft’s demise had been doing the rounds of social media after large flames were spotted emerging from the hangar, which was believed to be housing the AN-225. It was then reported that it had indeed been destroyed.

Dmytro Kuleba, Minister of Foreign Affairs, tweeted to confirm the destruction of the plane on February 27, a report that was corroborated by the Ukrainian defence company Ukroboronprom, which manages Antonov.

“The occupiers destroyed the aeroplane, but they won’t be able to destroy our common dream. Mriya will definitely be reborn. The restoration is estimated to take over 3 bln USD and over 5 years. Our task is to ensure that these costs are covered by the Russian Federation, which has caused intentional damage to Ukraine’s aviation and the air cargo sector,” said Ukroboronprom in a statement at the time.

Footage from #Gostomel Airport in #Ukraine showing what used to be the world’s largest aircraft – only one ever built, the Antonov #AN225 ruined & in flames pic.twitter.com/Az0jxm7qFR