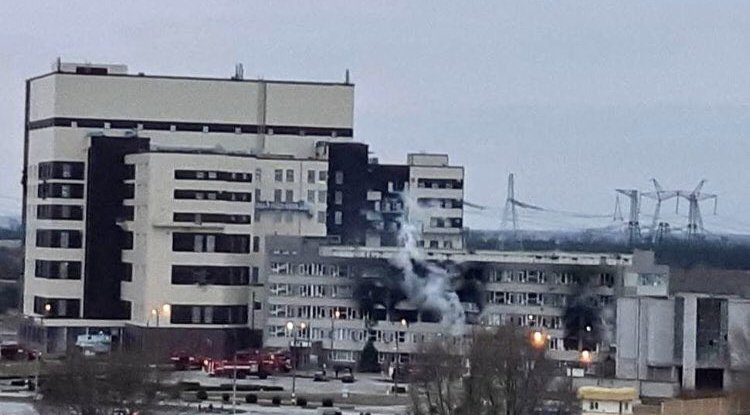 Sky News are reporting that after Zaporizhzhia was hit by Russian missile strikes, three Ukrainian soldiers were killed.

Two others were apparently wounded during the attack, according to the Ukrainian state nuclear company.

Videos on Twitter showed that the airstrike attack had resulted in several fires breaking out near the plant. Rafael Mariano Grossi, director-general of the International Atomic Energy Agency confirmed that they were burning in an “adjacent” training facility.

Early fears were that the Russian airstrike had hit one of the plant’s six nuclear reactors, however, Mr Grossi confirmed that this wasn’t the case. Sky News noted that Ukrainian staff remain in the control room, despite multiple reports suggesting that the plant had been taken by Russian forces.

Mr Grossi said the situation remains “unstable” in Zaporizhzhia but that no nuclear material had leaked in the airstrike, with the International Atomic Energy Agency confirming that there has been no change in radiation levels.

A tweet from the IAEA said: “Ukraine regulator tells IAEA there has been no change reported in radiation levels at the Zaporizhzhia Nuclear Power Plant site.”

The New York Post also reported on Friday, March 4 that Ukraine’s state emergency service had put out the fire near the Zaporizhzhia nuclear power plant.

Ukraine President Volodymyr Zelensky had earlier stated that “Europe needs to wake up. The biggest nuclear power plant in Europe is on fire right now.”

He continued: “I am addressing all Ukrainians, all Europeans and everyone who knows the word Chernobyl, who knows many casualties were inflicted by the explosion on the nuclear plant. This was a global catastrophe and its consequences were battled by hundreds of thousands of people. Tens of thousands had to be evacuated and Russia wants to repeat that and is already repeating it, but 6 times bigger.”