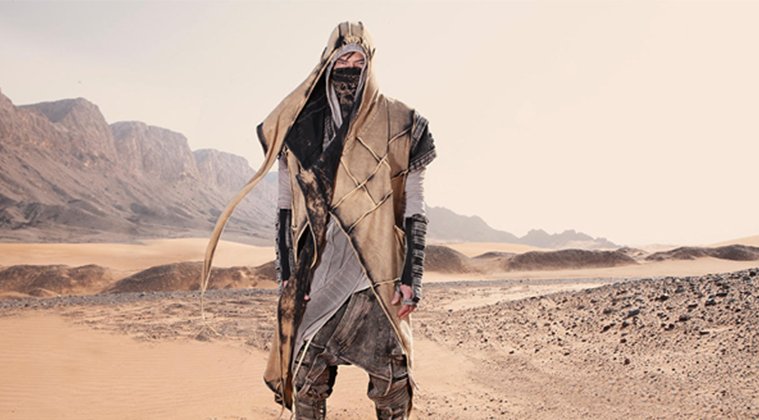 Frank Herbert’s 1965 sci-fi novel, Dune, has inspired an array of pop-culture tributes. Notably, the most recent adaptation of the original film provides a unique take on visual storytelling. Set in the deserts of Arrakis, a distant planet, the film depicts rolling hills of expansive sandscapes. The setting is barren and stark as director Denis Villeneuve wanted a minimalist approach to the film’s aesthetic.

More than just film adaptations, the novel has incited a fascination with futurism amongst fashion’s elite. Designers are not just creating garments for the everyday person, but are envisioning what life could be like in the future, and what clothes they could wear to aid in their existence. DEMOBAZA, the futuristic fashion brand, has been invited by Dune creators to join forces and create a unique sustainable Dune X Demobaza collection.

Amidst a world where humans have destroyed all computers, AI and intelligent technology, Dune is set in the year 10191. The visual narrative explores what future humans would look like, and how they would dress. Regardless of the film’s post-computer setting, the garments worn by characters are obviously influenced by technology.

Despite the lack of computers, Dune’s world is far more technologically advanced than contemporary humans can imagine. This would suggest that the film’s aesthetic is still informed by technology, and Dune’s fashion appears to have been created in response to technology, rather than in collaboration with it.

DEMOBAZA seems to echo this fashion ethos, by drawing inspiration from only the natural world to create their garments. However, their motivation is to incorporate technology into their design process, by designing for specifically: “A new human being who will pass over to a new spiritual world.”

When speaking to Vogue, Dune’s costume designers Jacqueline West and Bob Morgan described the arduous process of creating a futurist aesthetic for a new world. The pair looked to the past to design costumes that referenced ‘feudal courts,’ but still represented the power of future technology.

As a result, Dune’s costumes do not look like traditional sci-fi garments. Interestingly, the film does not need an emphasis on hi-tech clothing for the costumes to appear technologically advanced, or indicative of a futurist aesthetic. Similarly, in creating their Dune X Demobaza collection, DEMOBAZA sought to reference a future world, by using the natural world as inspiration. Here, they harnessed technological motifs to create a vision of a world where nature and humans are one.

A new take on minimalism

Many critics were shocked by Dune’s expansive, and largely barren, landscape and aesthetic. The film did not utilize traditional tropes of sci-films representing maximalist spaces. The desert is a treat to the eye, with Villeneuve purposefully showing shots of enormous, open and unfilled spaces. This makes the film a paradise for lovers of minimalism.

This sense of minimalism also extends to the costume design. The garments are gray and conservative, with a distinct notion of functionalism. The stillsuits worn by the Fremen are utilized to transfer bodily fluids into drinkable water. In this sense, the costumes are meant to represent a functional purpose, more than a fashionable message.

DEMOBAZA, in their Dune X Demobaza collection, alludes to this with their representation of wrapped cardigans, gloves and shawl masks. The desert is a key component here, as the fashion is designed to meet the elements of the desert. The garments are minimal, and are shown in taupes, beiges and grays.

Both the film and DEMOBAZA collection rely on texture more than pattern or color. The stillsuits from Dune are ribbed and padded for protection and security. DEMOBAZA reflects this in their collection by using ribbed and layered material to form a textured and bulky appearance. Their forms are effortless, however, and are shown to drape and fall in a natural and organic motion.

Dune also poignantly alludes to a uniform with their costuming. DEMOBAZA, in a similar way, has created their garments to represent a ‘deconstructive uniform’ for a new age in humanity. Both channel a sense of minimalism in this approach, to cleanly and acutely signify a future world.

Frank Herbert’s novel has served as the inspiration for various forms of pop-culture for decades now. However, with the widespread popularity of Dune: Part One, the sci-fi hit has had a resurgence. DEMOBAZA, a futurist fashion brand, has joined in with their Dune X Demobaza collection.

The film and designer brand pairing is a perfect fit, thanks to their shared expression of futurism, aesthetic, and minimalism. Both look to the future to represent a singular ideal of what humanity will inevitably become, and look like.